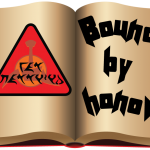 On this episode of Bound By Honor, Jorn and Ja’Jim discuss Vengeance by Dafydd ab Hugh. Jorn describes it as an escape-room adventure and Ja’Jim points out some plot-holes. In any case, despite Kurn/Rodek being on the cover, there isn’t a lot of Klingon stuff in this book as it focuses mainly on Bashier, O’Brien, Garak, and Jake who are left to defend the station after Sisco and all the other officers are lured away from the Deep Space Nine and Klingons stage a takeover of the station. Then there’s Worf, whom may or may not be a traitor to the Federation. It’s not a bad book, it’s just lacking in a good Klingon story. Qapla!