After participating in KAG’s “Klingons Have Vision 2020” activity for the months of January and February 2020, two members of the IKV Executioner warped to the Captain’s Galley in Granite Falls, NC to attend the Hudson Lions Club bi-monthly meeting and present the eyewear that was raised.

The Klingons wore full battle armor and carried bat’leths. They were well received and asked to present a short program about the Klingon Assault Group and the “Klingons Have Vision 2020 program.”

IKV Executioner CO, IXL Brigadier Keela zantai-Septaric, spoke. She told the Lions that the Klingon Assault Group was an international organization founded in 1989 and had members from all walks of life. She spoke of how chapters were called ships and that the Executioner’s charities were initially for Hospice, but upon her being hired as Housing Director for Kwanzaa Family Inn women’s shelter almost five years ago, she had her ship switch its charitable priorities to support that organization. She mentioned that it was an honor to partner with the Lions’ Club in supplying used eyewear to third world countries through their various medical missions and she thanked them for all they do for the community. In closing she sang the Klingon anthem, “Koi Kahless puq lod” for the group.

The Lions were so impressed they invited the Klingons back any time and picked up the tab for their meals. Some questions were asked, especially which stars the Klingons had met over the course of the years.

Attending the presentation of the eyewear was IXL Brigadier Keela zantai-Septaric and Lt. Commander Kas’Duj vestai-Mjolnir. Lt. Martok “The General” vestai-lungqIj was unable to attend, but he along with the other two participated in the “Klingons Have Vision 2020” project.

Both Keela and Kas’Duj receive a battlenotch for their representation. Qapla’! 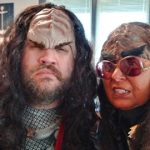 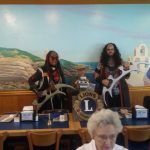 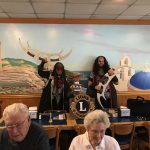