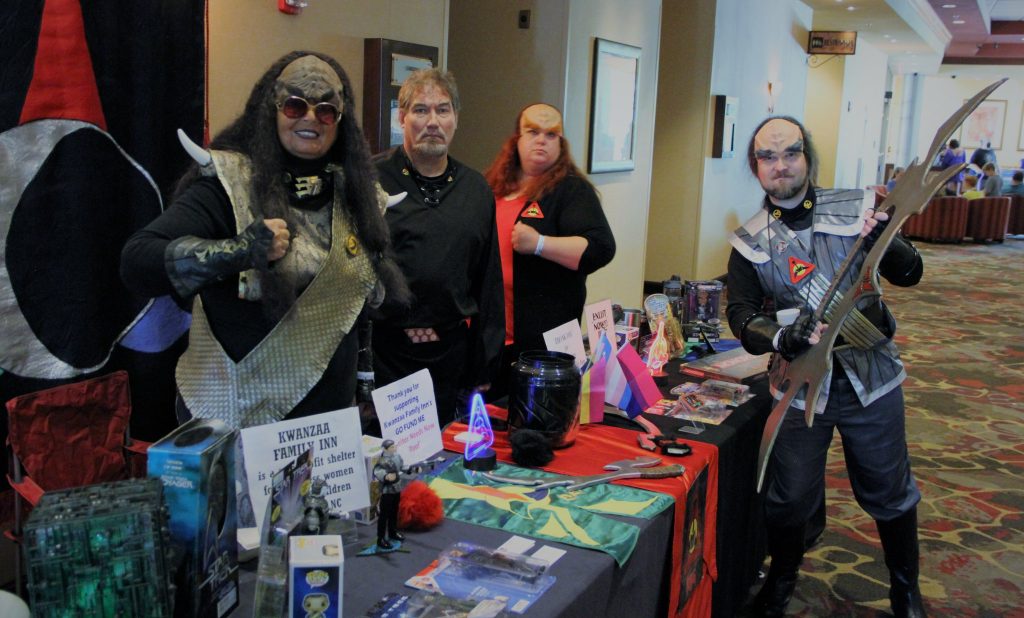 Ships from Dark Star Quadrant have been invading these cons for years, always raising funds for charity. This convention was a little different as we went minimalist this time to make sure that convention organizers understood that fully. No matter the size of our set up nor the number of collectibles we displayed, we were there to raise funds for charity, not make personal money.

After that clarifying discussion, we were given the greenlight to use a con table and one that the KPV Krimson Fury brought (along with their collectibles). Even though we did not have our Command Chair, ship interior backdrop, display of weaponry, Borg Queen, Borg Regeneration Chamber, or a targ-shit ton of collectibles, our presence was still notable and attractive.

We were saddened to learn that our fellow Warrior,  IXL 2nd Lt. Way’nar tai-Barr’ak (Wayne Brown) and Eva, his progeny, were involved in an early morning accident when their vehicle was sideswiped by another, resulting being badly shaken up and Way’nar suffering broken ribs. They were missed and positive energies continue to be sent to speed their healing. We will see them at the next battle!

It was an honor to finally catch up with Gamora of House Zen Whoberi Ben Titan (Amanda Fifield), new IXL KAG member and promote her officially to IXL 2nd Lt. tai. Qapla’!

$650 was raised for Kwanzaa Family Inn’s roof repair project. It is a projected $100,000 venture and we are doing our part, slowly but surely. Any help is appreciated. Just mail check or money order to Kwanzaa Family Inn at 1631 Old North Road, Lenoir, NC 28645. Accept our thanks!

Afterwards, the victorious Warriors warped to a nearby Golden Corral for a much needed and deserved delicious buffet FEAST! All Warriors who appeared in uniform were granted an additional battle notch for invading. Qapla’!