Myself and Lt. Vixsor departed from our home in our trusty shuttle craft headed to Okotoks Alberta to attend the 1st Annual Foothills Comic Con by request of the fellows that we meet at Vul-con back on star date 58542.7 (July 22, 2017) who was manning a booth showcasing the upcoming Comic Con. We left our location at approx. 1030hrs, but first had to stop and refuel our shuttle, and then acquire some credits from the local ATM.

As neither myself or Vixsor had ever been to Okotoks we relied on our trusty nav computer (GPS) to guide us there and to the establishment where we’d be housed for the weekend. The trip was rather uneventful with little to see along the way other then the few terrans that refuse to obey the limit of warp 2 and think that warp 2.5 is acceptable.

Once we arrived at The Royal Duke Hotel at about 1400hrs, we checked in and proceeded to move our luggage from our shuttle up a full flight of stairs to our room where we settled in. The room was adequate with a small fridge, microwave, coffee pot, and 40” TV. At about 1530 we was both hungry as we had a small meal at 0930 that morning, so we thought we’d check out the English style pub in the hotel. There was no gawk, or bregit lung on the menu, but we found something to satisfy our hunger.

After our early dinner we decided to check out some of the local shopping centers for something to do. I imputed the coordinates of one place into our nav computer and off we went only to find out the nav computer was not as accurate as we thought it was placing us a few kellicams short of our destination and telling us to turn around. We found the place shortly after farther down the sector and we went in to check out the wares.

After our shopping was done I had a feeling about our nav computers ability to get us to the location of the comic con the next day and we thought it best to do a recce of the area to see if it was right. Needless to say it wasn’t, taking us up an uncharted dirt road. We could see the building we needed to be at, but the road we were on didn’t lead us there and we was forced to turn around and plot a course ourselves. A few minutes later we found the right way to the location, and sure enough the road we needed wasn’t on the nav system even though it was updated just prior to leaving that morning. Once we knew where we had to be the next day, we returned to our room for the night.

We woke at about 0800hrs to prep ourselves for the upcoming day, the con wasn’t till 1000hrs, with a travel time of 10 minutes once we figured out where we needed to be, so we had a quick breakfast and changed into out battle armour as it was rumored that the 501st legion was going to be present. At 950hrs we boarded our shuttle and launched off to the con.

Upon arriving at the landing pad we was greeted by some volunteers that guided us to an open parking spot. Once parked we got out and finished putting on the rest of our armour. The fellow that pointed out our spot then came over and commented on the window decal I have on my rear window, the one about Klingons don’t care about your stick family, he said he liked it and we had a good laugh together.

We then entered the building and was pointed towards the check in desk where we got our wrist bands so we could come and go threw out the day. Not even 30 seconds later we had requests for pictures from a few terrans just coming in. Once the photo op was done we entered into the very large area for the con which was made up of 2 full sized hockey rinks, guests, media stage, and gaming area to the left, and vendors and artists to the right. We had to walk down a short walk way that separated the two areas which also held the silent auction and con merchandise table.

One of the volunteers that was manning the silent auction tables saw us and said, “oh my god, the Klingons are here, can I take a picture we you both”. Being the smart one that I am, I looked him in the eye and said “Hija ‘ach QaQ Dop Suq” for which he gave me a weird look, so I translated it for him to “yes but get my good side”, so pictures was taken again. We decided to check out the vendors first which was to the right side of the walk way. Once we entered I saw in the corner to our right the group from the 501st legion which consisted of one officer in a black jumpsuit, one scout trooper, one clone trooper, and 3 storm troopers. The officer spotted us and pointed to us, in which in unison 5 buckets turned and looked at us also.

We made a lap around the vendor are stopping long enough to give a wave to the 501st, and then proceeded to the guest area. There we meet the original Mantracker Terry Grant who was very nice and even autographed my book that he co-wrote about tracking for free. After him we chatted up with Garrett Wang from Voyager. He was the one that had mentioned that he heard there might be a Vul-con next year which got us a bit unnerved. We then had a photo op with Terry Grant, and chatted with him some more. Once we was done there we stopped by the Vulcan Trek and Tourism booth to see about this “rumor”. Where the lady manning it said that there was a good chance there wouldn’t be a con but to keep checking the website.

We continued around for a while taking pictures of the great costumes that was there and having our pictures taken with con goers. Every time we was around the vendor area we made it a point to bug the 501st but in a friendly way, even stopping to have our picture taken with them only to be approached by the officer in black who was trying to recruit us. Sorry buddy, no sale.

At about 1230 hours we needed food, so we checked out the food stand there and grabbed some growlies. I also messaged Capt. K’Rau (Jaymz Smith) and Admiral Kris (John Halvorson) about the possibility of no Vul-con next year while I was waiting for my lunch. Once feed we went back in to the vendor area where a lady stopped us for a picture and to say that she’d been to a few comic cons in the past but they all lacked one thing, a Klingon presence.

We walked around for a while longer, but Vixsor was starting to get tired, my knee was starting to get sore, and we was both sweating pretty good, so we headed back to our hotel shortly after 1400hrs for a shower, some rest, and some pain medication.

Once back to our room we changed out of our armour, showered, and relaxed for a bit waiting for the pain meds to kick in for my surgically repaired knee. We later ventured out to find a few needed things and to find a place for our evening meal ending up at Swiss Chalet. After dinner we went back to our hotel and rested the rest of the night getting ready for the trip back home the following morning.

We awoke at 0800hrs as check out was at 1100hrs. We packed up the rest of our things and moved our luggage back down the stairs and out to our shuttle craft where we departed at 0930hrs for home. First we stopped to top the tank up and to get some breakfast, then started off for home taking a different route back then what we used when arriving a couple days earlier.

Instead of taking a direct course home, we took a small detour and headed to Vulcan to inspect the Trek center and maybe voice the disappointment of the empire at the thought of no Vul-con next year. When we got into Vulcan we first stopped by the newly renamed “Klingon Way” to take pictures of the sign then headed to the Trek center. To our disappointment, the place was closed on Sundays, the Ferengi dogs, so we weren’t able to pick up any souvenirs, or mention our concerns about next years no con.

So with that we headed for home taking the usual route back that I always take when going to or coming home from Vulcan, a route that I don’t need my nav computer for as I can pretty much drive it in my sleep.

We arrived home at about 1330hrs and off loaded our stuff from our shuttle, unpacked our things, and prepared for going to work the next day. 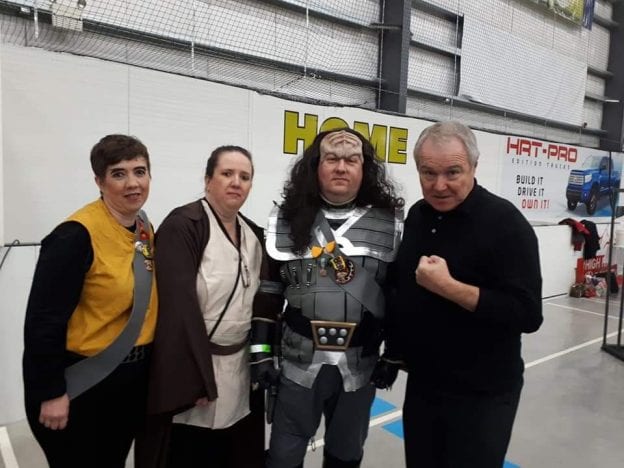