Saturday, July 20, 2019 (50th Anniversary of the Lunar landing) was also the inaugural Wilkes ComicCon at Historic Benton Hall in North Wilkesboro, NC. In separate shuttles, Warriors from the IKV Executioner warped to the battle site. Arriving first was Chief Medical Officer Martok. Shortly thereafter Keela, CO, and Grakus, XO, disembarked. This battle was an unusual one for the IKV Executioner as special permission had been secured to have weapons, both live steel and prop, on display at the con.

Immediately after arriving and offloading at our table location, which was a prime corner spot with a huge green Alien head overlooking the proceedings, we set up the tables, dressed them, and arranged the weaponry. Live steel was on the back table out of reach of the huMans and their larva. Prop weapons for the most part were on the front, but some were in the back as well. Weapons included bat’leths, various knives, disruptors (including disruptor rifles) and a whip. Also on display were headpieces and pieces of uniform and armor hanging for passersby to view. The IKV Executioner proudly flew her quadrant and fleet awards of years past. On the table two B’rel class Birds of Prey and various drinking mugs were also on display. The Warriors armored up once the table was completed. Suddenly the Romulan CAPri beamed down to join the fray.and Keela facilitated the transformation of both him and Grakus, our two Romulan Mercenaries into their normal appearance by using her genetic re-sequencing equipment.

Once the humans gained entry to the battle, the fundraising for Kwanzaa Family Inn women’s shelter began. It was a hard fought battle, but all of the Warriors prevailed, especially Martok. $267.56 was raised in cash monies and approximately $22 in Square donations. It was glorious. We met the Kilted Creature whose mate recounted meeting two of our KAG members at a Franklin, NC parade, Tony and Becky Roberts. Qapla’!

CAPri had another engagement and had to leave the battle early, but his efforts were appreciated. He will henceforth serve as ship’s counselor. Everyone who participated receives a battle notch for their efforts. Many thanks to Denis LaChapelle who have us the table space, free admission as exhibitors, and provided food and drink throughout the day. Qapla’! 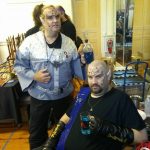 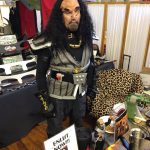 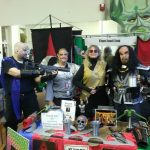 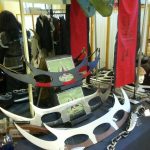 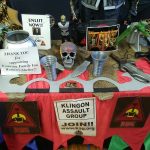 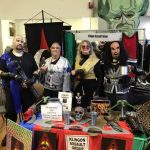