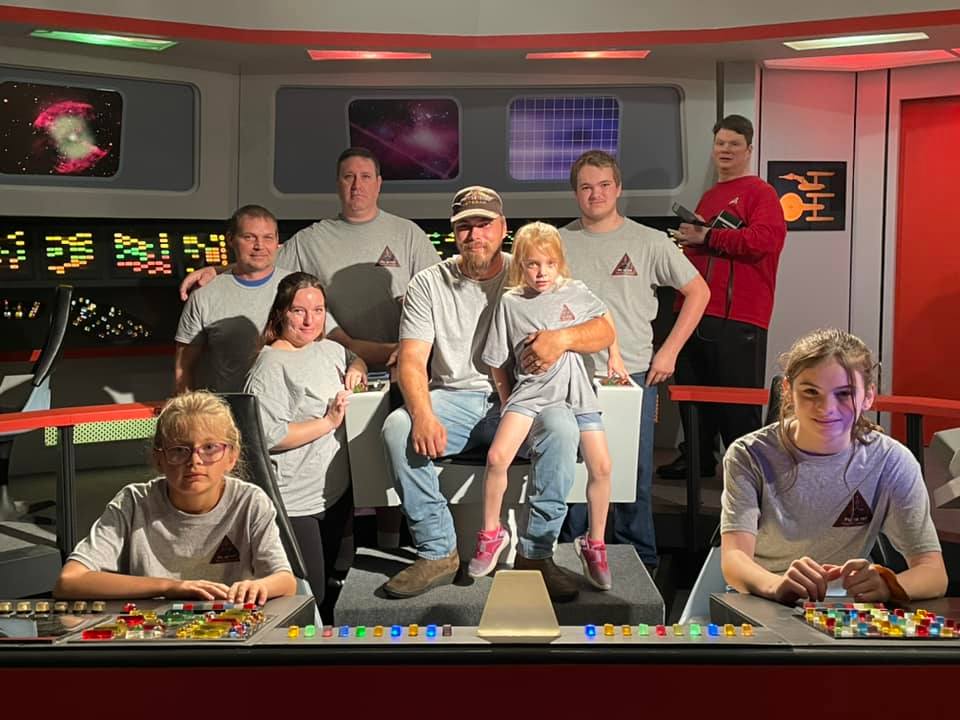 Let me preface this AER by giving a big shout out to my crew. Our original mission was canceled due to weather, but they were flexible and although we all didn’t get to hang out as intended, we still had a successful mission.

This alternative mission began a week ago when crew members Butch and John began their trek. First meeting with our XO Mary, cadet JB, and Chief Engineer Kevin on planet Navarre to feast and celebrate the ancestors. However the foolish cook brought John’s food out over cooked so everyone was treated to a show as our XO rammed the manager into a torpedo tube and shot him into space. Chief suggested some upgrades to their shuttle that I believe are now currently being installed. Of course i’m sure the crazy weather was a topic of discussion. It was definitely a great night and I am saddened that i was unable to attend.

After Butch and John departed the system. The dreaded storm hit the system the XO heard the de stress call of a small kitten. Acting quickly she dispatched our Chief Engineer out into the storm to find the helpless kitten. He searched through bushes and under buildings with no fear of lightning, spiders, and snakes unfortunately he became wedged under the aforementioned building and our XO had to save the kitten. Our listening station in the system claims to have recorded a loud laughing at the time our Engineer became wedged.

As stated our original mission had been canceled due to weather, and we thought about how to plan a little something for their time in Lake city. Need to give a big giant shout out to neutral zone studios here. At 10:30pm on Friday night Ray Tesi and I emailed back and forth and Ray got us scheduled in for a tour (no small feet if you’ve had any dealings with our crew you know that we have four cadets and that made for a total of eight people who had not reserved places on the tour.)

For those of you who might not know Neutral Zone Studios is the set where they filmed Star Trek Continues during the period of time when we had the Star Trek dead space. The set is the original series enterprise and starts in the engine room.

The engine room is the only room that is separate as they just didn’t have the room to have it connected. After leaving the engine room you are led to the doors that lead to the set proper. When those doors open I suggest looking straight ahead it feels like you’ve stepped onto the Enterprise.

As you make your way through the corridor your first stop is sick bay. The bio beds are covered in the original fabric specially ordered by the crew as it’s no longer created. It is here you will find some concoctions that doctor McCoy has been cooking up presumably for the crewman in isolation. If you round the corner you will get to see a shuttle hiding back there, and a mark two torpedo. If that’s not cool enough your next stop is auxiliary control. As a note I wouldn’t let space hippies in there lol.

Next is the briefing room. It doubles as the rec room depending on what furniture they place in the room. An interesting note is that the briefing room table is designed to look like an aircraft carrier as a nod to the navy.

Our next stop was the Captains quarters/guest quarters. As we left Vic Mignogna (Captain Kirk) took over the tour. One thing you will immediately see if you get the chance to tour with Vic is that this set is basically his Star Trek play ground. He led us to the transporter room and while explaining about transporting and how it works for the show; he looked a kid in a candy store.

Next and finale destination was the bridge of the Enterprise although you won’t find that name on the plaque. This is because as Mallory (BTW don’t let your wives or daughters around Vic he definitely lives up to the Kirk name lol) was we’ll call it fan girling he proudly announced that he I’ll paraphrase and not use his word “acquired” the enterprise plaque, Captains chair and a seven foot model enterprise for his personal collection, and if you ask him to see his pictures Vic will then stop the tour tell everyone to go play with stuff while he shows off all his pictures on his cellphone. BTW this is a great time to live out your childhood fantasy and jump in that Captain’s chair!

After we all got our pictures they treated us to a previewing of a new fan film on the bridge! We definitely had a great time and have been invited back again, I look forward to the day that our entire crew can visit the Neutral Zone and take our place on the bridge.