Woke up in the morning with an adventure that laid ahead. Grabbing my d’k tahg on the way out the door with four hours later finding myself in a place where we will all drink, eat and play games!

Annually, Klingons meet in Daytona Florida for the Klingon Feast. They come to turn off their personal holo-emitters and be themselves.

Five ships of the Dark Moon Fleet were in attendance this year:

The following members of KAG showed up for the event:

Along with other warriors of the empire and some brave Starfleet personal we shared stories, games, food and drink as this was the last Klingon Feast in Daytona as it has been for the 20 years. Anyone who finds themselves in such an occasion with Klingons will find them nothing but jovial and generous. The relationships that form quickly over food and drink can not be discarded so easily. This is why there will be another occasion by a different name next year.

I also want to add here I am proud of the KAG warriors that were in attendance. They left a great impression on the rest of the attendees and other guests of the hotel. Some have been coming for a few years and always leave a great one but there were a few more this year and left the same great impression. It was a KAGtastic time! I am proud to be deputy commander of such an awesome fleet of Klingons and Xeno warriors and their friend. 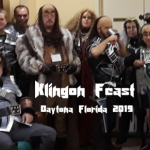 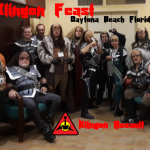