On March 7, 2020, the IKV Executioner represented the Klingon Assault Group at the Marion Comic Con. IXL Brigadier Keela zantai-Septaric, CO, and Lt. Martok “The General” vestai-lungqIj, Chief Medical Officer, attended. The Klingons were given a very sweet corner position with access to a rolling backdrop (separating the stage area from the rest of the vender tables) to showcase the premiere of “General” Martok’s new Klingon Command Chair that he built.

Along with the Command Chair as a photo-op fundraiser, the ship also presented Star Trek items for sale, a % of the proceeds to go to our traditional charity, Kwanzaa Family Inn women’s shelter, and also solicited straight donations. The Command Chair was a great attraction and we were kept very busy posing with many interested humans and their larvae.

One of the highlights of the convention was talking with Matthew Holdren of Asheville, NC a KAG member along with his father from many years ago, and bringing him back into the KAG fold as a member of the Imperial Xeno Legion as a Mandalorian. Qapla’! and welcome home!

$361.68 in total donations was taken in. Much chocolate was given out to donors, several recruitment nibbles were fielded, many pictures were taken and a good time was had by all. A battle notch was earned by the two Warriors. It was a glorious victory for the Klingon Assault Group. 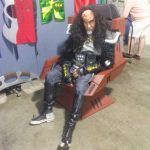 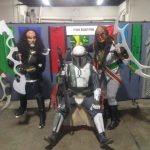 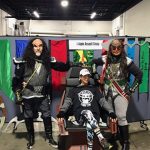 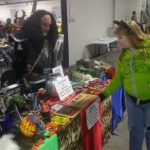 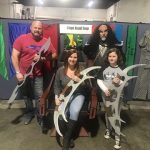 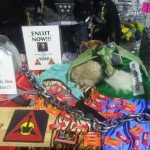 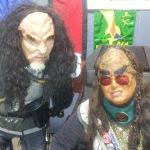