The CO and several crew members of the IKV Executioner represented KAG at the Charlotte Comicon Winter show in Charlotte NC. on Sunday Dec. 15, 2019. After the event, contact was made with the local 501st and others to have a feast to commemorate the success of the convention. It was decided to rendezvous on the planet Ruby Tuesday in a nearby sector. The Executioner warped there first and secured a place. Members of the 501st and a few Ghostbusters and friends attended the event.

The food was excellent and the conversations were interesting. Keela, still under the influence of a terrible Earth virus, could only eat soup, but others feasted on many different and exotic delicacies.

During the meal, Barrie regaled us with a tale most honorable of his first experience with Klingons at Dragon*Con nearly 20 years ago. He recalls that the location was the Food Court in downtown Atlanta and many cosplayers were enjoying lunch. A young Downs Syndrome boy had dressed as Dr. Evil and was being bothered by a group of local teenagers. From a table of Klingons, one very large Klingon male stood up and intervened, sending the bullies scattering. The entire food court area cheered. And as the young Dr. Evil was exiting, the Klingon assumed the Dr. Evil pose and uttered “One Million Dollars” to which  the boy whirled around and responded in kind. Barrie has never forgotten that.

I was so very proud at that moment. I am unsure which group of Klingons it was, but I suspect it was either members of KAG or KLAW. Whoever it was, he represented Klingon fandom at its finest: standing up for the downtrodden.

It was a glorious Good Day to Dine, well earned after a successful battle at the Charlotte Comic Con. A battle notch is awarded to all armored KAG members attending. Qapla’! 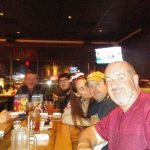 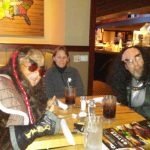 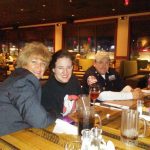