On Terran date, 22 SEPT 2019, the crews of the IKV Spirit of Honor and the IKV Chi Jev converged on the PGN Mini-Golf course in Hickory Hills, Illinois and engaged Federation forces (Fantom Battalion) in tests of skill at mini-golf.

Before action ensued, a plea was given to the “DIVINE TREASURY” as a warning that a supplicant was arriving with a Death Howl as a warning for deceased FEDERATION OFFICER NOG.

The Battalion team was double the number of the Klingon team and we showed a valiant effort, but ultimately fell in the final score by 10-20 points. We maintain the opposition used Ferengi math to confuse the Klingon score keeper, Warrior J’Han reHop (Janine Veasquez) while tallying the final score.

The encounter was conducted in a steady drizzle and overcast skies as the Klingon forces doggedly pursued and strategically countered every stroke the Federation members executed. The lead KAG officers, Brigidier maroQ (Marc Malnekoff) and Cdr. qorDan (Mike McVeigh) coordinated the Klingon forces to optimally utilize them to deploy the crews onto 2 courses and conduct operations before a threatening ion storm (severe downpour) made combat navigation near impossible. Brigidier maroQ was seen displaying exceptional skill in surprise and ambush tactics against Federation officers. As the encounter ended, damage was surveyed and the Federation claimed the day.

During a break in the storm, both forces converged on a neutral outpost to sate their appetites at Lindy’s Chili/Gertie’s Ice Cream in Bridgeview, Illinois (where Cdr. qorDan is in negotiation to carry a KAG Burger). Chili, tamale boats, gyros, patty melts, burgers and other sandwiches were enjoyed by all. The outpost created ice cream creations that measured AT LEAST 7 INCHES IN HEIGHT!!! These Battalion officers also brought their standard, whereas, Brigidier maroQ and Cdr. qorDan “acquired” and made certain “alterations” to it.*

As the day ended, a promotion ceremony was conducted by Cdr. qorDan to promote Warriors tammoH QanaSon, XO, IKV Chi Jev (George Velasquez) and J’Han ReHop, Communications Officer, IKV Chi Jev (Janine Velasquez) both to the enlisted rank of CORPORAL for attending their first event as KAG members, and promoted Warrior Alenis Naprem-QanaSon, Science Officer, IKV Chi Jev (Melissa McVeigh) to the rank of 2nd Lieutenant with the honorific of “tai” for attending her first event as a member of KAG and furnishing a uniform WORTHY of an IXL officer. Before setting course back to assigned patrols and bases, oaths were made (and hands shook) and we enjoyed favorable feedback from all that attended and made mention of POSSIBLY doing this again at a future time.

(*)No flag/standard/banner was actually harmed during this mission. The opposing force was able to retire with their’s FULLY INTACT. 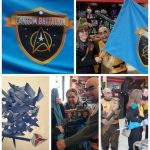 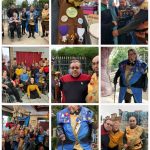 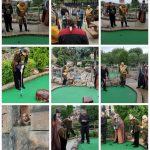 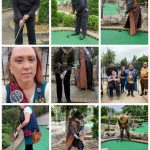 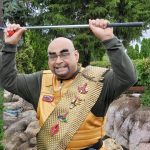