Hail Warriors now that my communication array has been rebuilt I am now able to catch up on me AERs. On 5/4/2019 “General” Martok made an appearance at the Taylorsville Apple Blossom Festival to represent KAG. From my initial observation it looked like I was well received, however after about 2hrs I was approached by one of the event coordinators and asked to leave the festival, I asked what the reason was that I was being asked to leave and her reply was “that the dealers and vendors are paying for their spots” and I was just walking around taking pictures with some of the vendors and attendees. I expressed that there were other people walking around in costume and her reply was that everyone in costume was being asked to leave and she also said that I was scaring the children. I then informed them that everyone that approached me for a picture or to comment on my outfit were quite pleased and were interested in learning more. All in all even though I was asked to leave the festival, in my eyes, I succeeded in my mission in getting some exposure for KAG… Qapla’!! 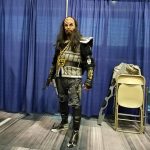