After completing routine patrols (cloaked) of Sector 0.0.1 (Federation nomenclature) to ensure that Federation was complying of all applicable treaties (Note: possible violation of Bio-Warfare treaty, Tribble trace signatures detected), the crew and Captain of the IKV Logh Veng beamed down to an event called “AggieCon 50” for cultural outreach and education. This “convention” has the distinction of being one of if not the oldest fan run convention in the world. Once we had sufficiently intimidated… I mean persuaded the un-blooded warriors running the convention to allow us entry, we rapidly determined the best location to set up an information table. We also used small chocolates as bait to entice Terrans to approach close enough that we could educate them and encourage them to consider joining the empire.

We witnessed many strange sights and saw many strange creatures. One category of unusual creatures we saw were part of a larger group categorized as “anime”. This group my pose some threat but also might be of some use to the empire as their weapons of choice seem to be exceptionally large swords.
While there we conducted 4 “panels” for the Terrans. These panels were: Klingon Language: A Primer, Klingons: Past, Present, Future and cosplaying them, Why Klingon, and A Hitchhiker’s Guide to Qo’noS. We also conducted a training session and small tourney for Klin’Zha. The winner of the tourney received a wooden 3-piece Klin’Zha board and 3-d Printed playing pieces. The second-place prize was a wooden Klin’Zha board. All players received a cardstock board and a set of wooden playing pieces with the proper symbols color printed and affixed to the discs.

While it would be difficult to truly asses how many of these Terrans retained the knowledge we shared with them, we did recruit at least one and possibly 5 more crew members. There was minimal Starfleet presence which allowed us to better “persuade” the individuals to join the glorious Empire. Visual records both still and motion were made of the event and are being/have been posted to the appropriate locations. The Logh Veng has returned to our normal patrol routes and will continue to serve the Glory of the Klingon Empire and the Honor of the Klingon Assault Group! 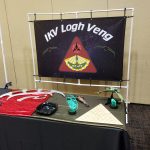 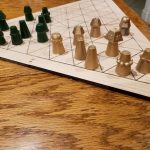 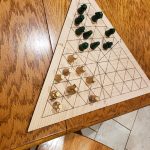 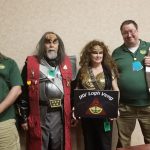