As a Commander and Klingon, I felt it my duty to check out this Sunrise comic con. In it’s second year, it has come alive and I feel that it will grow with each  following year . As it was, It was a great little con complete with a dealer’s room , panels .gaming area ( pc, console and table top. I was in my Kingdom ) and costume contest. It was not as hot as a usual South Floridian day but it was hot. While there, I saw Pinocchio’s fairy try to animate Buzz Light year after she did a death drop on stage . ( So glad I went to that lip sync panel. Yes, that kind of a con. I think next year I will go on stage and lip sync the Klingon Pop Warrior If I do not have a table .
StarFleet was there and as usual had brought their tribbles . I Found a brownie that I was considering sending the fleet out ( with the Supreme Commander’s permission ) to take for the empire! Fortunately ,we do not have to waste the resources. she delivers. After telling her she was dangerous ( my kind of woman), I grabbed a Terran drink ( soon after that brownie it was important to try a drink ) Bubble tea, blueberry with tapioca orbs. It made for one happy Klingon , Which was good for everyone else. Those are the Klingons you want to be around. I made some friends, met up with some friends and passed out my cards All in all It was a good day for the Klingon Assault Group .
Join me next time on :
What is Commander (Games Chancellor) chISwI’ sutai-lungqIj doing now. 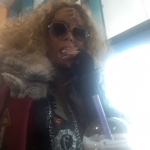 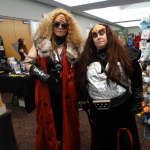