Friday morning, September 25th, I left the comfortable confines of the Research and Development lab I have established here in what the Humans call Central Florida and headed for the annual Klingon Feast held by the beaches of their Atlantic Ocean.
I brought with me the mechanism needed to run a game of Klingon Jeopardy for the event on that night. Including the pain sticks for those who would incorrectly answer the clues. Unfortunately the audience in attendance was too good at Star Trek Trivia and very few jolts were given out. A lot of chocolate was though.
Saturday saw the event in full swing. We tried an adaption of Lord Vam’Pyr’s Hungry, Hungry Klingons. A table full of Tribbles was made available to each of the teams of contestants. They were then blindfolded and buckets placed around them on the floor. Each member of the team was given a mek’leth and placed at each of the tables edges. They were to swat the Tribbles until the table was bare of them and attempt to get them in the buckets (of which they had no idea where we had placed them).
Later that day the annual arm wrestling completion was held, a road rally with radio controlled cars, Star Trek Trivial Pursuit, and a story telling completion. The night ended with the actual feast, the oath to the Empire, a death howl was lost warriors, as well as miscellaneous awards given out.
Later that evening the annual Scavenger Hunt tallies were made and the Synthehol competition judged.
Sunday we packed up and headed back to the lab for further research into new things for KAG to use or do.
Reporting this day: Jorn sutai-Vam’Pyr 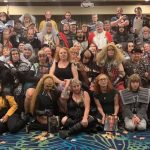