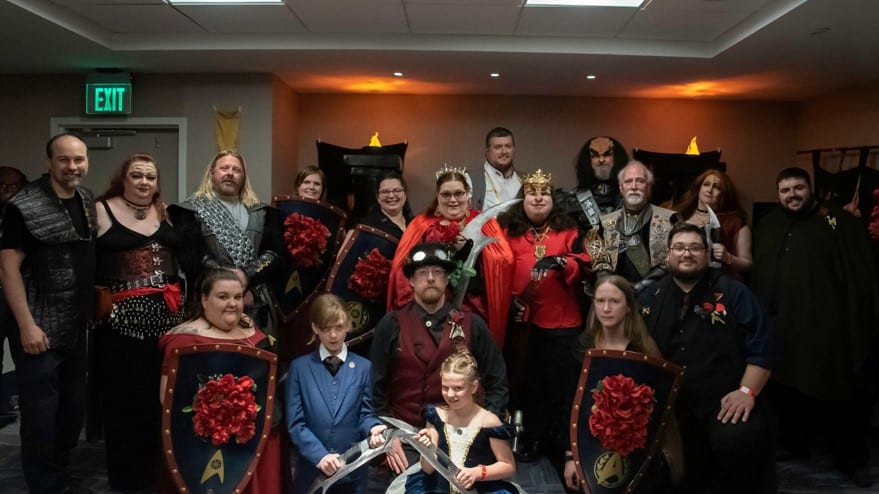 Thursday
On Thursday, I loaded up my ship early with all the equipment we would need for the weekend, and headed out to the Starfest station. The night before the CO of the IKS Tal Shak came over to transport the Klingon Captain Chair that we would be raffling off at Starfest.

I arrived at 1300 hours to begin unloading the equipment into the Klingonfest room. My personal items were transferred to my private officers quarters. Captain Dekard Arrived at 1400 hours and began the room setup. While that was going on I prepared the House Kahless Shrine.

Once the room was prepared several of us warrior went to the bar for some blood wine and gagh. We told tales and sang until there was no more to tell.

I rose on this day to a glorious day. Guest had been arriving all morning. I met up with several warriors and setup the Klingon Captain’s chair and set up the rest of the room. We began Klingonfest at 1400 hours with a roar rendition of the Klingon Anthem. This was followed by several new warriors getting a glorious Klingon name. This was followed by a panel from our Special Guest Nathan Warner. be sure to check out his works. http://www.blabberdock.com/home.html…

The day ended with Klingon Karaoke!

Saturday
Saturday began with Admiral K’var teaching Klingon History and The honor of Kahless. The day was filled with lessons on Klingon Language and many other lessons. The full schedule can be found here. http://www.housevampyr.com/klingonfeast/index.html

veqa and QorroQ trained warriors in the glorious Klingon language.

This was the Day for our Klingon Wedding. It was a glorious event with many warriors taking part.
Congrats to the newly Weds LoraQ and K’leela! Qapla’!
Thanks to the Moclan, who helped with the Wedding!

House VamPyr held their annual meeting and awards were given out to worthy warriors. A full list will be coming soon.
After the meeting, we ended up at the wedding reception. We had a special guest form an alternate universe Orville. Peter Macon, learned how to party like a Klingon and not a Moclan! Yeah, he partied until early morning and ended up being later for his talk the following day. Yeah, it was glorious!

Sunday
This is a day we use to train young warriors in the skills a warrior would need to become a glorious Klingon! I worthy Klingon adversary Captain James T Kirk made an appearance.

We collected 177 pairs of glasses for the Lions club that I hope to soon deliver to them. We also raffled off this Klingon Captains chair( I worked on this on and off for 3 years) and raised $150 for the Lions club.

The day ended with us packing up the room and loading up the ships for our return to duty. After we rest up of course.

You can see many more holoimages here