Once more the time of year has come for Timmins’ own convention. Weeks of planning, repairs, building and acquisitions all come together into one of our best events of the year for community engagement. tlharnoQ, O’C’Tav, majvIq and Marc established a foothold in the event facility on the Friday, building a base of operations at the heart of Cosplay Corner. This year Northern Ontario Expo was able to provide us with our space free of charge, so we endeavoured to make the most of it.

Our first order of business was to engage the Mandalorian Mercenaries. This was their first time coming to NOE and we had to let them know that this was Klingon Territory. Our opening volley struck hard.

Our newly commissioned  Second Lieutenant Marc earned his place by infiltrating the Mandos territory under cloak and depositing a gift from the Klingon Empire without their knowledge. It was some hours before they fully determined what had happened. Let it be known that as of NOE 2017, the club formerly known as the Mandalorian Mercs is known in the Empire as the Mango Mercs.

But of course, this was not all. A second warrior race in our halls? A test of steel was required!

Having found each other to be worthy and noble warriors, we celebrated with good food and good drink and decided to join forces in our efforts to raise funds for local charities. The Crimson Dawn was working to support Science Timmins, the local not for profit science and community centre, and the Mangos were supporting the humane society. On the second day of the event we traded causes to ensure both were equally well cared for, and to solidify the bond we were building together.
Together, our warriors raised $175 for Science Timmins, and $180 for the Humane Society.

Coverage of these fundraisers went out in Timmins Today https://www.timminstoday.com/local-news/klingons-and-mandalorians-join-forces-for-charity-612705
and was printed in the Timmins Times.

The other major project we engaged in was raising awareness for the Klingon Way project: an endeavour to convince the Town of Vulcan in Alberta to name their Star Trek park outside of Trek Station in honour of the Klingon Empire. The grassroots letter campaign had been reaching out to people online for several weeks and was coming into the final stretch. As one final push to make it happen, the Crimson Dawn created and distributed a form letter to make it accessible to the patrons of NOE. In the last hour of the convention, majvIq took all of our remaining letters and walked around the floor to gather signatures from the vendors. Over the 2 day event we gathers 91 letters in support of the cause, and enlisted the cosplay community to help spread the word. We await the final decision from Vulcan as to whether they will go forward with the project. 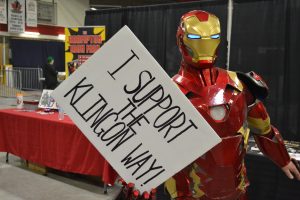 Not content with simply battling the Star Wars folks, we also took the battle to a group of Super Heroes who had invaded NOE from Toronto.

We challenged a tree…

The best battles though were with the tiny humans.

Sa’Moht got himself into some trouble with the Captain by wearing a Federation uniform.

Our new friends the Mangos took the night to lick their woulds and devise a counter attack.

tlharnoQ was asked the the convention staff to act as a judge for the costume contest, and Marc was donating his services as official photographer for the event. While majvIq manned the booth, it was up to O’C’Tav and his Klingon Ghostbuster to represent us in the costume contest. 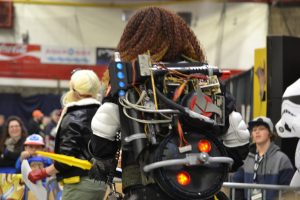 And of course, he had to go raid Ecto1!

At this point, we got a bit silly…

The Tellarite, Moonbeam McSwine (mask courtesy of Thought Admiral Kris) made a brief appearance, complained loudly that it was too human-y and walked out. We did manage to get one photo with him and some tiny humans.

After that experience, tlharnoQ needed some help feeling lady-like. So I signed her up for princess lessons. 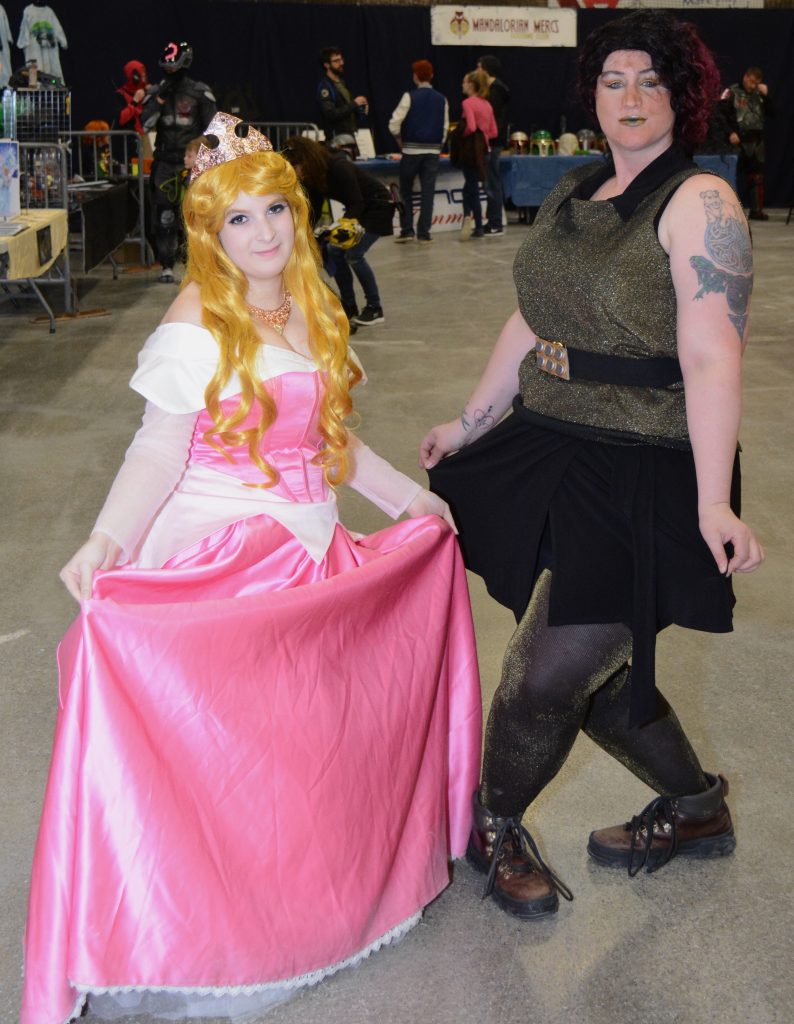 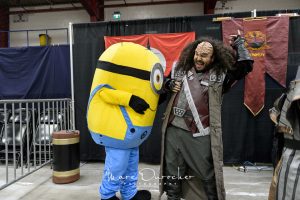 Oh, and there was Reginald.

For these and hundreds more photos from the event visit the Crimson Dawn’s Facebook page.

It was an extremely busy and productive event. Many photos were taken, funds were raised, promotions earned, new friends made, and glory won for the Empire.

Krikor’s Log, supplemental: In addition to our uniformed members, (Shawn V) was there in human guise. Members attending in uniform receive a battle notch, and tlharnoQ gets the strategy mark for organizing this event. Several members of the Crimson Dawn received promotions at this event:

For service to the ship despite not yet having his own uniform, Sa’Moht is promoted to sergeant.

I also sent my personal message to be read out, promoting tlharnnoQ to the rank of Lieutenant Commander.

In addition, K’Elanna, CO of the IKV May’vIloS, is promoted to the rank of Lieutenant.