Stardate: 20160611
One year ago, tlharnoQ showed up to the second ever Timmins Pride Rally and Parade dressed in armour, on roller skates, and holding a sign that declared “A Klingon will fight beside any honourable and PROUD warrior!” It would seem even one Klingon warrior was enough to catch the attention because in the lead up to this year’s parade our ship was contacted with an invitation to return. Haha, little did they know that preparations were already underway! 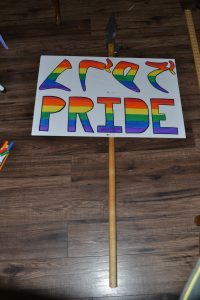 While in many parts of the world, Pride Parades and associated events are long established, in Timmins they are in their infancy. Here, the LGBTQ+ community has faced a great deal of ostracism at the hands of their neighbours and many have not felt safe to walk the streets alone. Many from larger centres have begun to travel to support this growing movement in the community, and to bask in the passion of those who are for the first time breaking out and being their true selves. The forces of the Crimson Dawn proudly assembled at Hollinger Park along with hundreds of others the promote Gene Roddenberry’s philosophy of Infinite Diversity in Infinite Combinations.

First on scene were tlharnoQ and Maj’vIq, who quickly grabbed the attention of the people at the park. Humans lined up for photos… 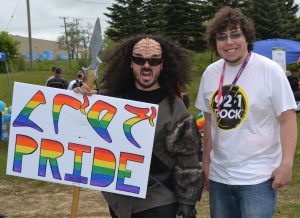 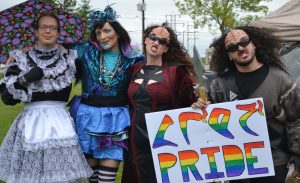 Over the afternoon, more members of the crew began to arrive and were in turn enlisted by the humans for photos…. 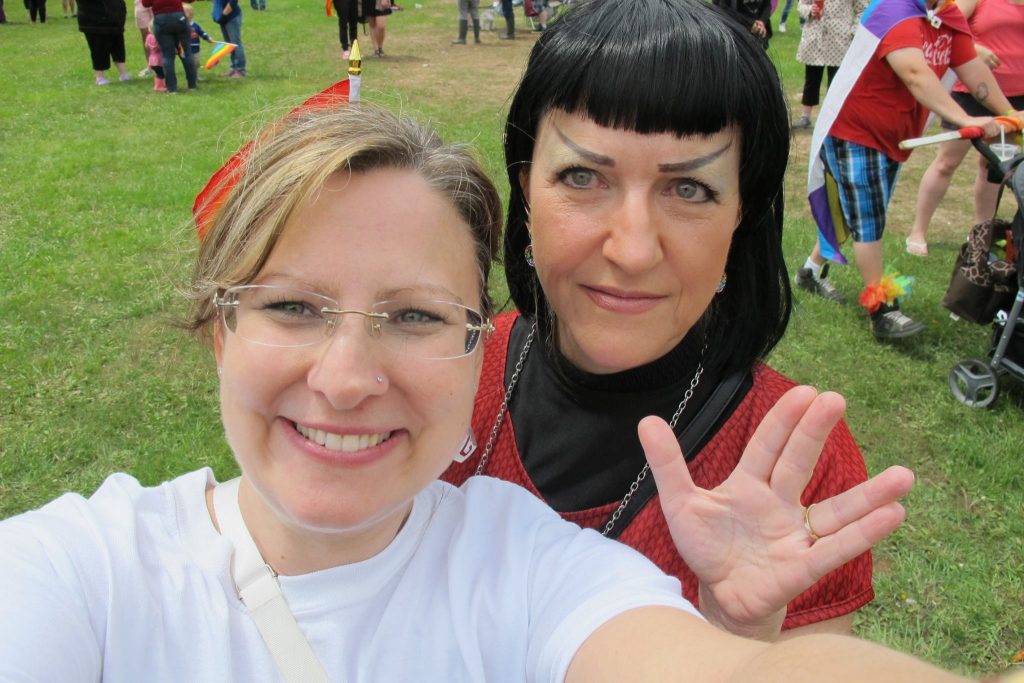 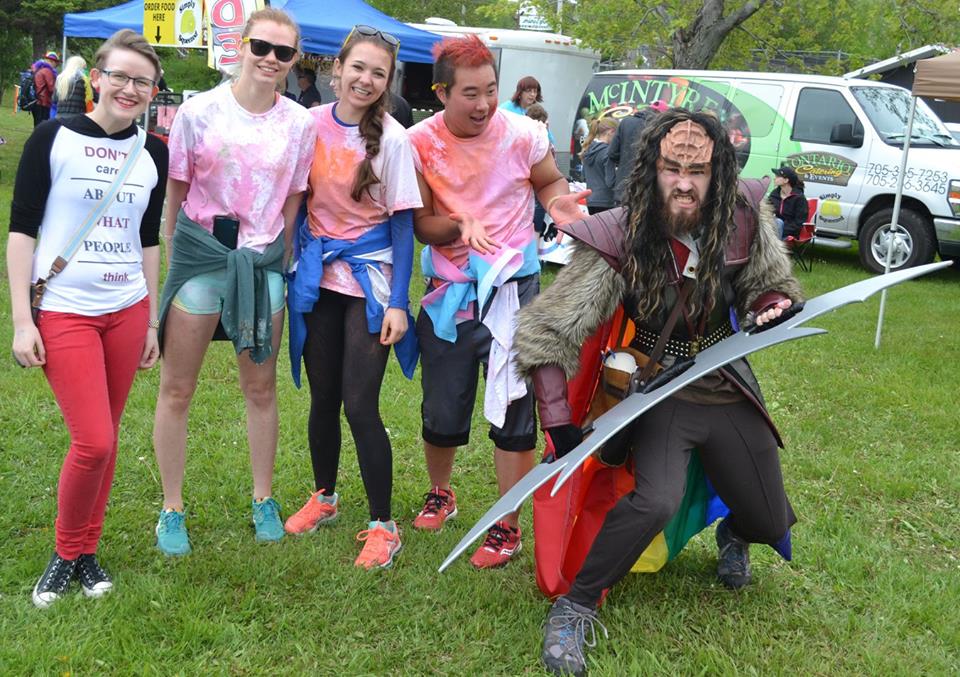 Sa’Moht and our new Cadet arrived, accompanied by the mighty Pride Hulud – cousin of the great Genesis Worms that reside with the crew of the IKV DARK SUN. 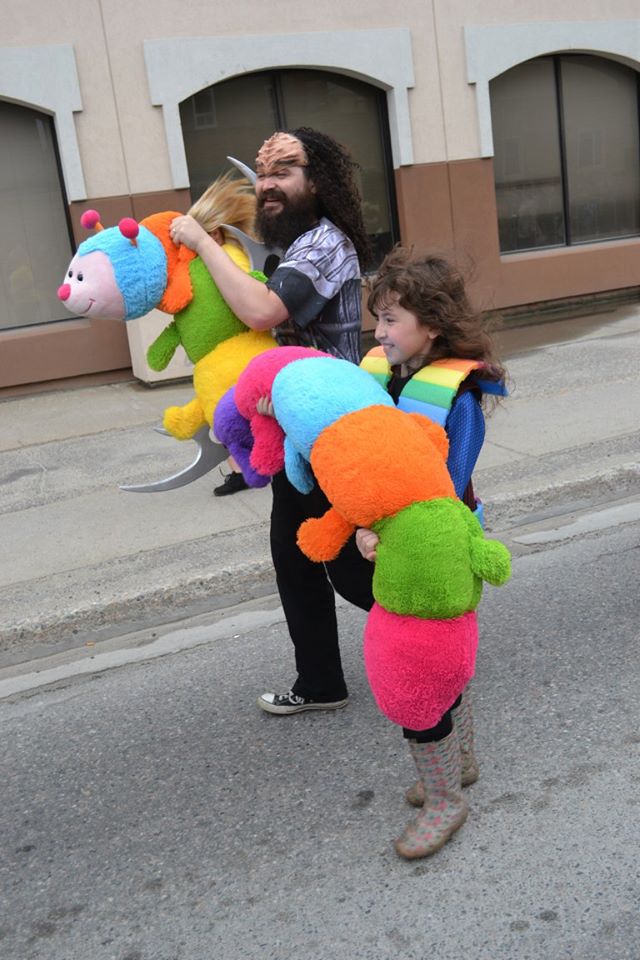 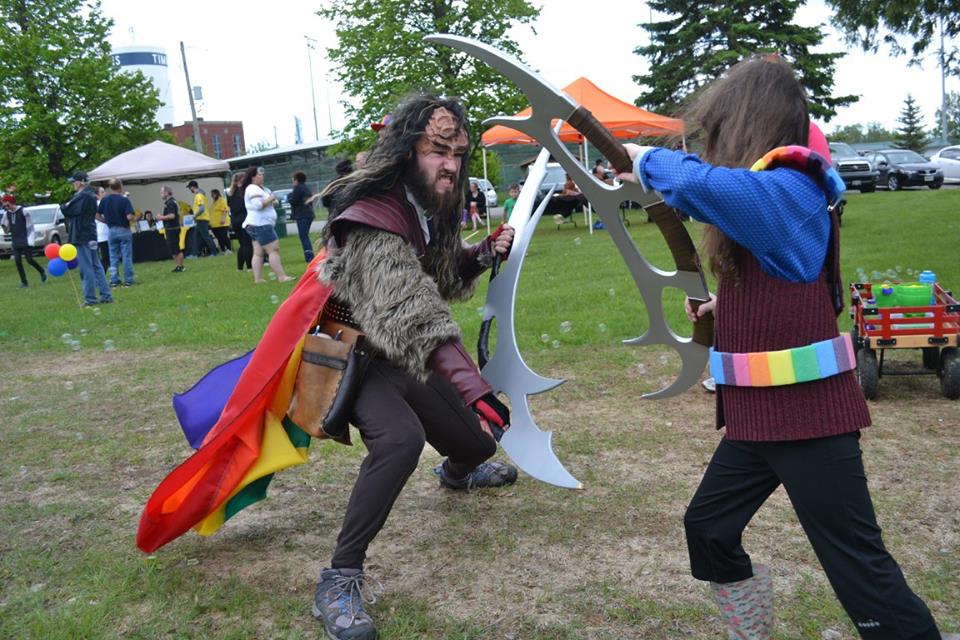 With the crew assembled, we decided we needed to get a photo with some of the fantastic performers who had been dancing at the rally. tlharnoQ had an idea of how to get their attention… 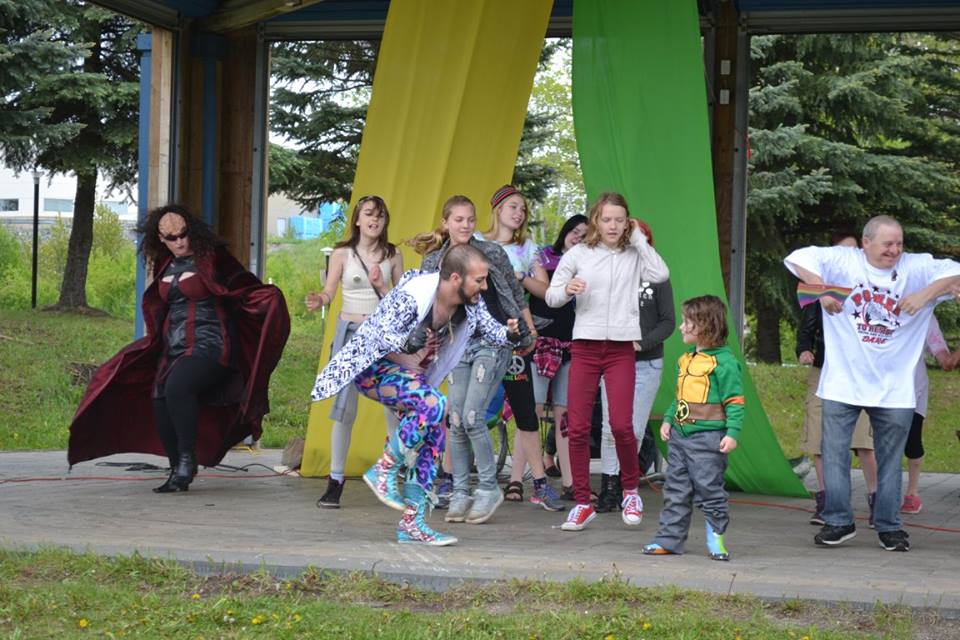 Seeing our Captain’s dance moves, they were eager to meet the rest of the crew! 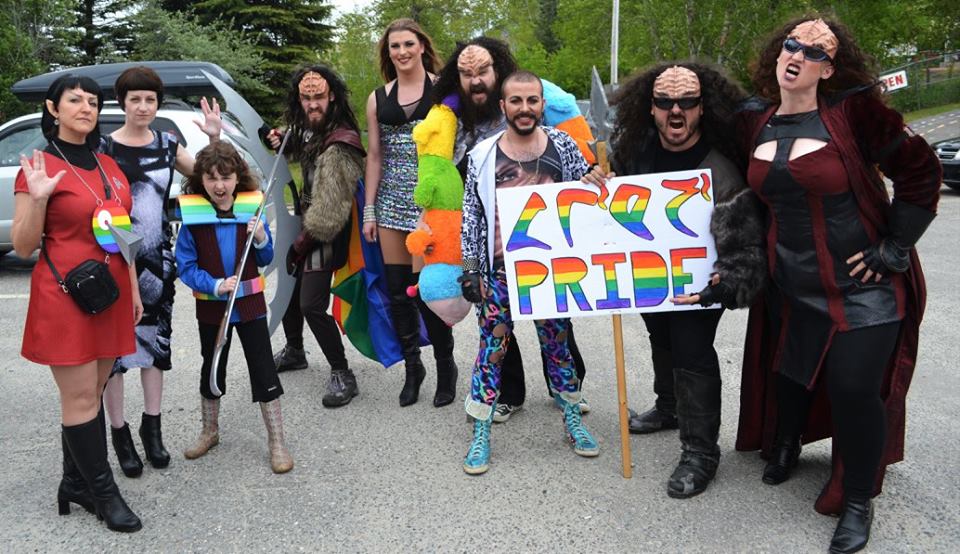 It was then that the parade began. Our warriors dispersed through the crowd, cheering, dancing and waving signs as the procession proceeded through the streets of the City. 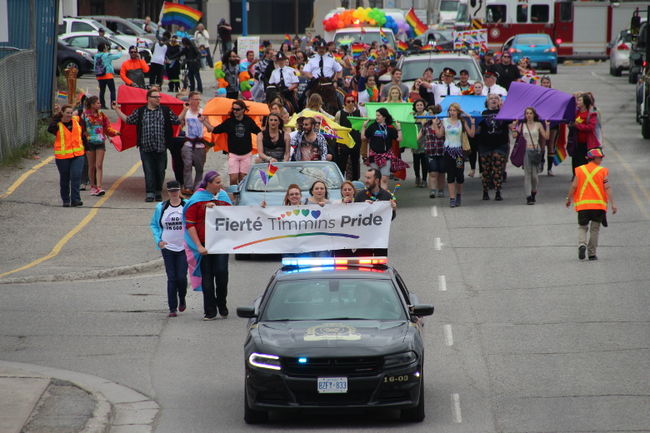 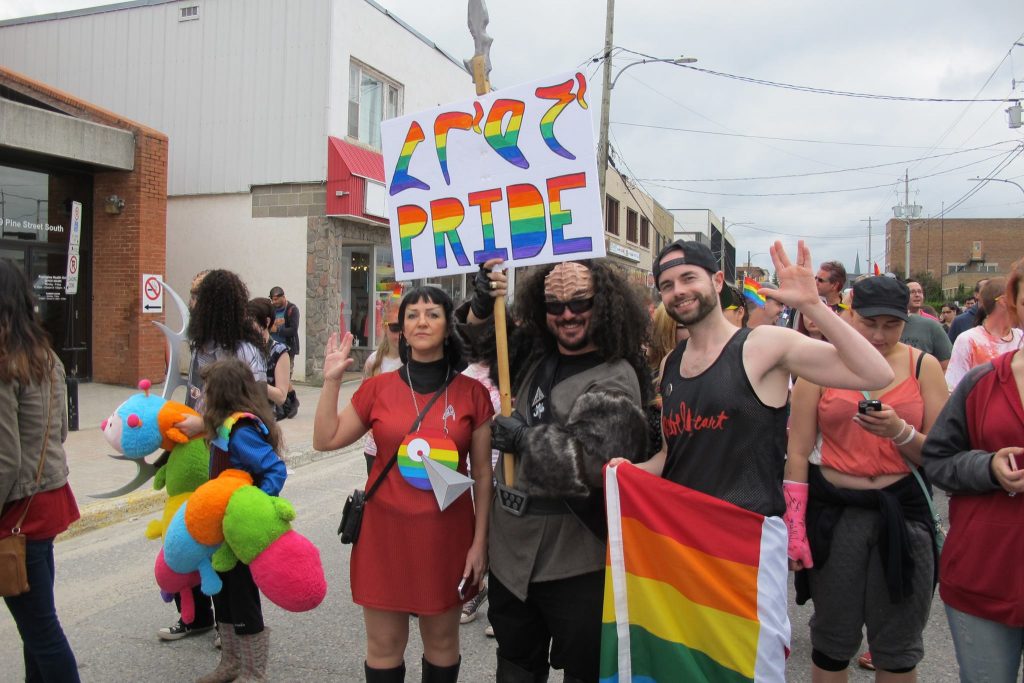 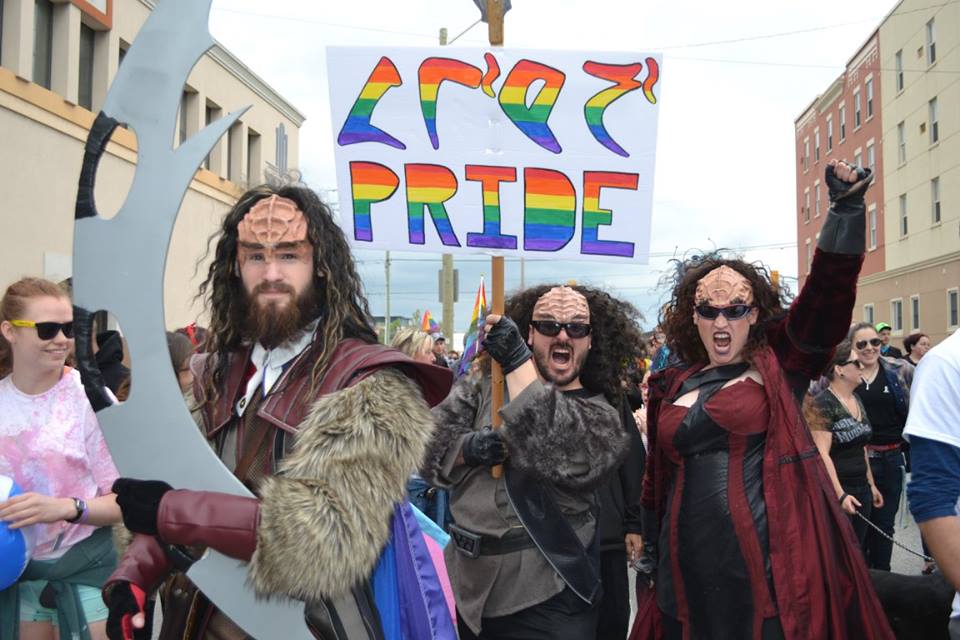 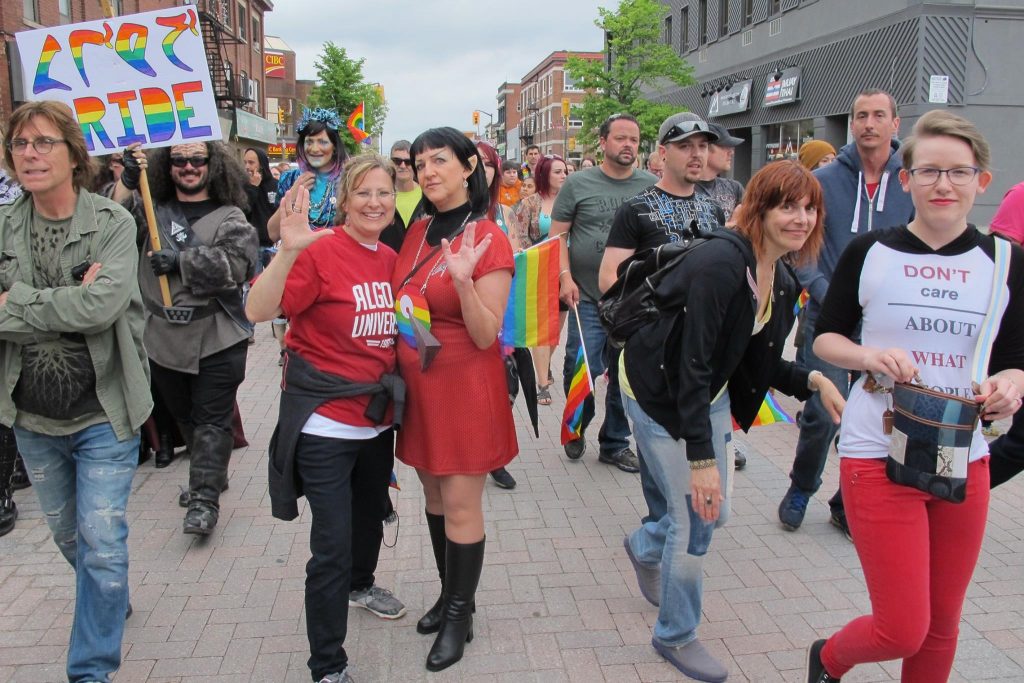 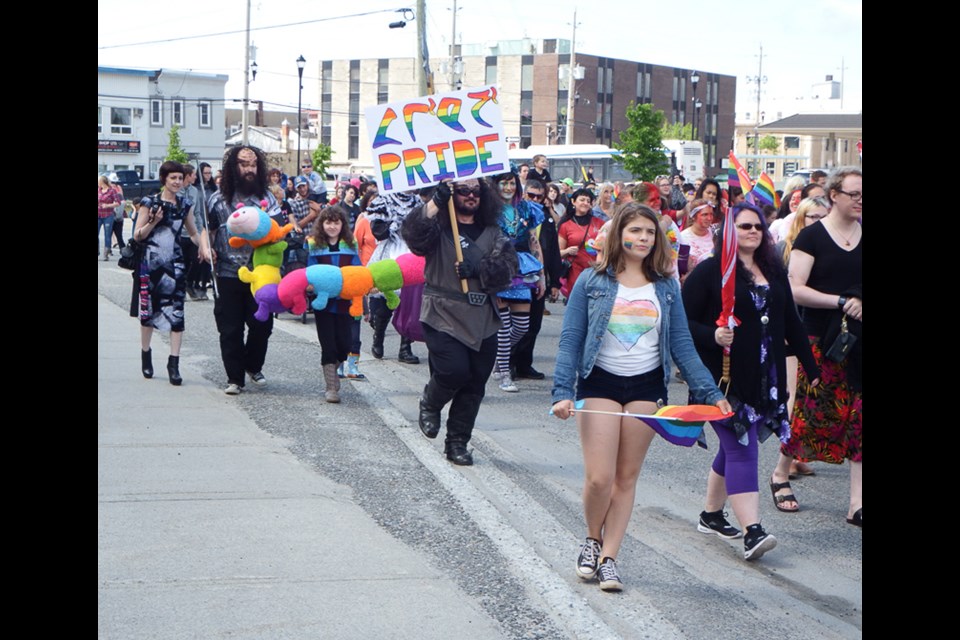 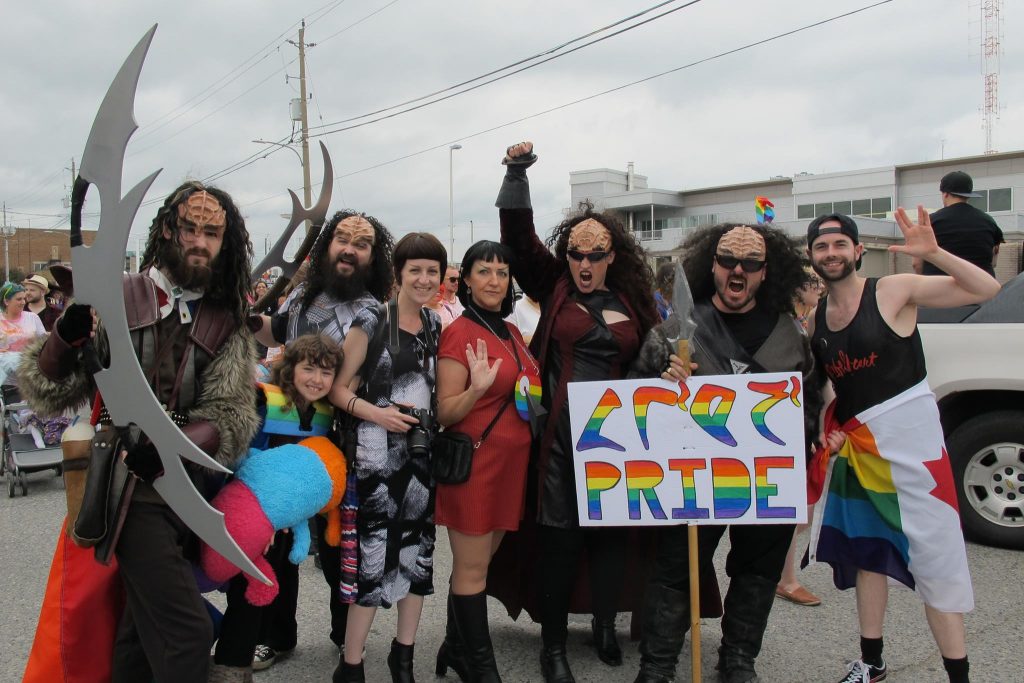 The weather was greatly unpredictable. It was humid with an icy wind gusting at 40km/hr and dark clouds threatening to unleash thunder showers on us at any moment. Our crew dressed for this, the weather of course decided to part the clouds and beam down sunshine and 30+ degree C heat. By the end of the parade we were all rather worn. Thankfully our newly appointed Chief Medical Officer Dhivanni had water bottles for the entire crew ready to go!

Re-hydrated, the crew gathered back together for the obligatory group photos. As you might suspect, the Crimson Dawn at Pride…   things got silly rather quickly… 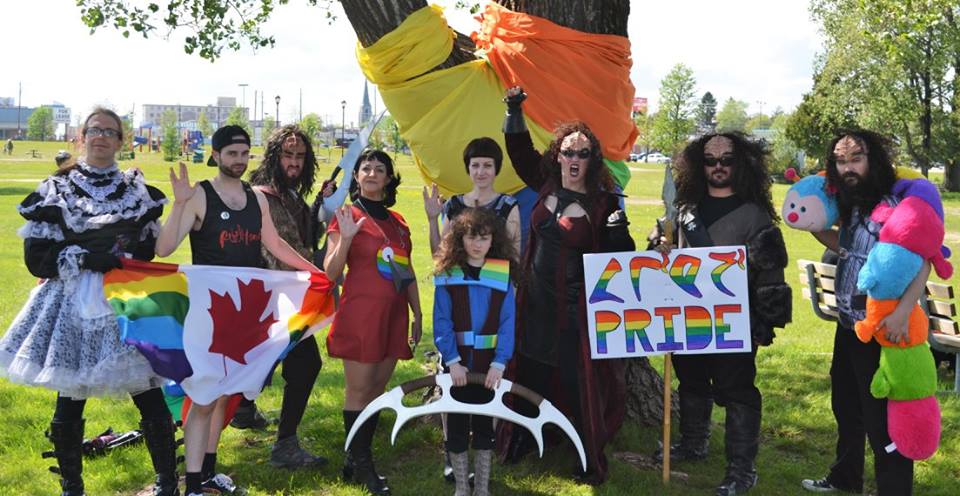 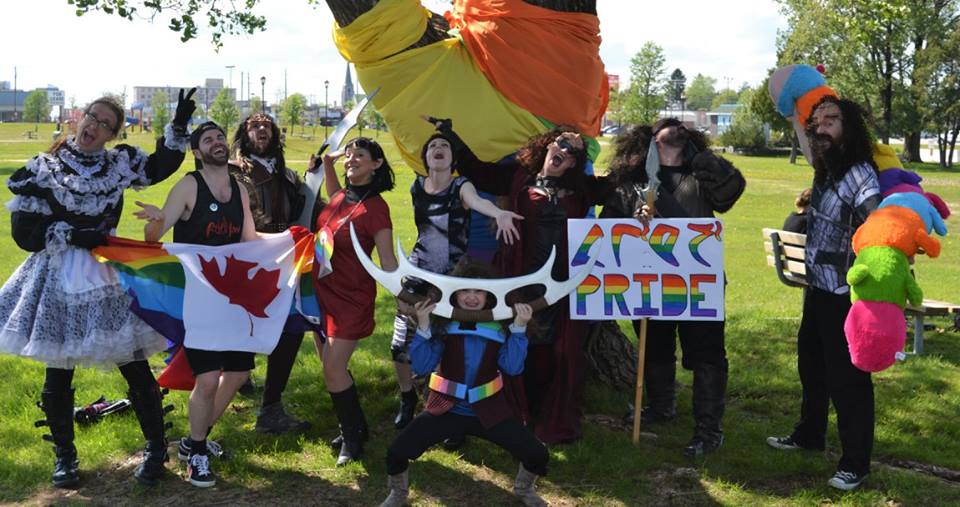 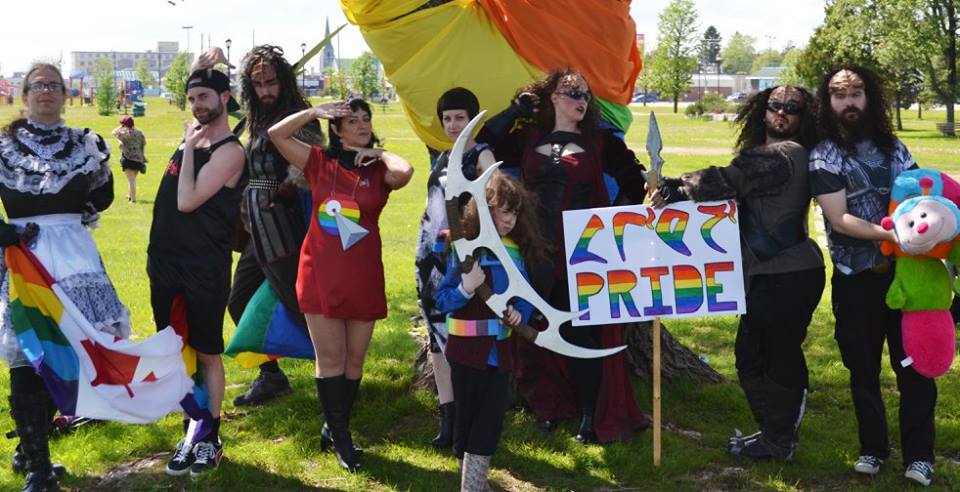 Although our presence was not the media’s focus, we did make the photo galleries of TimminsToday and the Timmins Daily Press, and the CTV News coverage of the parade.

Attending in uniform were:
tlharnoQ

Disguised as a human: Our Tal shiar agent Nivek who was working undercover within the Pride organizing committee.

In recognition of the completion of her uniform, Cadet Aelan is promoted to Cadet Second Lieutenant.

One final note…    as the party went on into the night and some of us continued in plain clothes to celebrate how far we’d come as a society, 49 people doing the same in Orlando were killed and 53 more were injured simply for being themselves. It was a sobering reminder of why events like the one we had taken part in are still so very important. We have already begun plans with the Timmins Pride representatives to have our crew return to next year’s event. 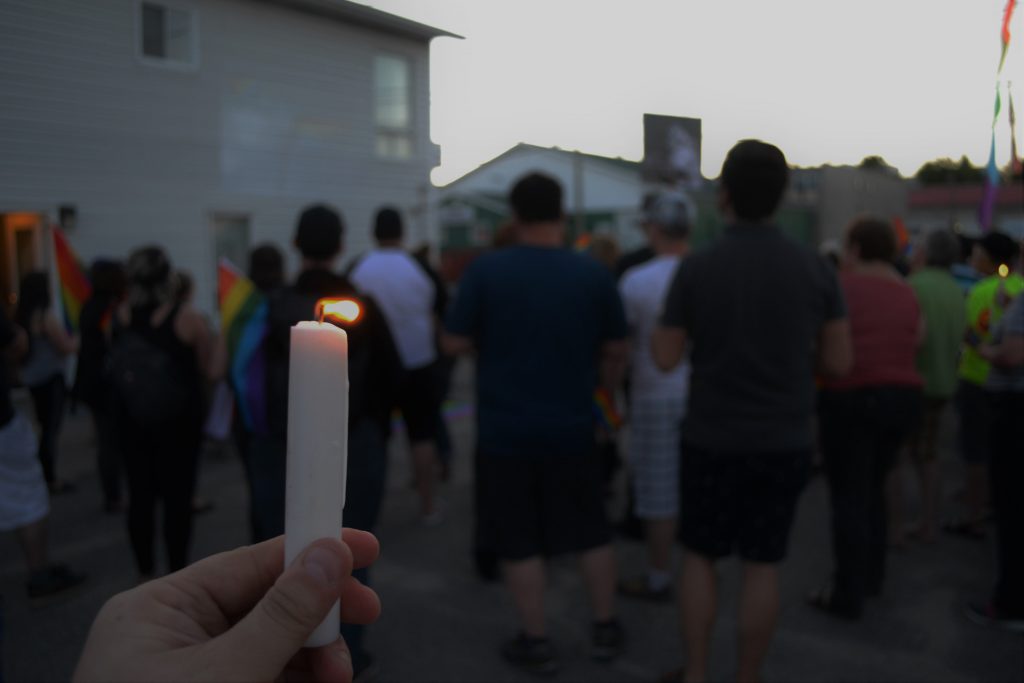 Tonight our crew donned plain clothes and joined with the rest of community in honouring those lost in Orlando. In the shadow of such a senseless act of hate, it is encouraging to find communities around the world coming together in this way. Our thanks to Timmins Pride and the Timmins and Area Women’s Crisis Centre for making this candle lit vigil happen.