After a series of delays involving meetings with Earth personnel, I flew the already packed cargo shuttle of the IKV Raging Wolf to the home coordinates of House Mjolnir. There Lt. Cmdr. Kas’Duj vestai-Mjolnir, CO of the IKV Executioner, boarded and together we warped to the Charlotte, NC sector. Upon arrival we docked in the deep recesses of the Charlotte Convention Center. Off loading and setting up of the KAG recruitment table commenced.

Tom Gardner, former CO of the Carolinas Garrison of the 501st Stormtroopers, Vader’s Fist, requested help with setting up their display, so Kas’Duj went to assist while I continued to fine tune the KAG table displays. This year KAG ran a dual fundraiser: 50/50 between Catawba Regional Hospice and Kwanzaa Family Inn women’s shelter. Typically our method of fundraising is to call out to passersby to solicit donations. This year we attempted a silent auction, but it was immediately apparent that Heroes Con is not the venue for such a fundraiser. Eventually we had to just take best offer on all the goods that had been donated for that purpose. Many thanks to those who donated items at ConCarolinas. Your generosity helped raise funds.

(Next year it would be good if the charity(ies) that we raise funds for would provide a smart phone with a card swiper, as many of the con-goers had no cash, but had the card. More donations would have been possible, I believe.)

After finishing the KAG table, I too assisted with helping set up the 501st display. It was awesome and cost about $2,500 of Tom’s personal money. The displays consisted of a scene with two life-size Ewoks scavaging a crashed speeder bike, a wall with a door with C-3PO peeking through it and a Jawa standing outside, table with various helmets from the movies, and finally the trash compactor from the first movie complete with foam rubber trash (a big photo op draw). During Heroes Con, the 501st raised funds for Make-A-Wish at Heroes and they had plenty of costumed characters running around as well, including Darth Vader. I am proud that we KAG members were able to assist by helping them set up.

At some point that evening, I paid for Kas’Duj and my memberships. We left off helping the 501st when the Convention Center closed that evening and headed back towards the palatial planetoid of IXL Lance Corporal Kelvin Vod, a Trill warrior in service to the Klingon Empire. For all his help and support of KAG members, including me, I hereby promote him to full Corporal. Qapla’ Kelvin!!!

We ate at China (an Earth country) Buffet that evening. They provided excellent food worthy of a Klingon palate!

After shuttling past the small McDonald’s asteroid for breakfast, Kas’Duj and I warped towards Heroes Con. It was not a new star path, but it took the navigational computers longer than usual to plot a course successfully due to lack of familiarity with the target destination from Kelvin Vod’s planetoid home. However, we arrived safely and paid the Ferengi in attendance to secure a parking orbit close to our battle site. Upon arrival, we armored up and began battle. Attendance was fairly good for a weekday.

Kas’Duj soon found out what I meant when I said that Heroes Con is a working con for me. I am almost non-stop in my efforts to raise funds. Breaks were few and far between, but Kas’Duj was there to support and his efforts were much appreciated. The attendees were fairly responsive to our combined efforts, however, it must be noted in our medical files that deafness abounds in the huMan species, especially when it comes to charitable donations versus buying something they want for themselves.

We were aided by Kate Foil, potential KAG recruit, dressed as Batgirl. She single-handedly saved Sunday (our slowest day) the year before with her Mary Jane Watson persona. Cuteness definitely equals donations! I am pleased to report that the efforts of Batgirl, Kas’Duj and myself resulted in approximately $440 being raised.

This was our busiest day. Fortunately, we were joined by IXL Lt. Armon tai of the IKV Gre’thor’s Revenge. Armon is a Mirror Universe Classic half-Klingon / half-huMan. He was very instrumental in raising funds last year and I could not have done it without him. This year he was invaluable as well. After armoring up, he wore the sign on his broad shoulders that said “Show Honor! Donate to Hospice!” and stalked the con soliciting donations and spreading awareness. And shopping. He also took turns with Kas’Duj and myself calling to passersby to solicit donations for the cause. Qapla’!

We moved the Silent Auction out in front of the KAG table to see if it would garner more interest, but what little it did was not enough to save the concept for future Heroes Cons.

We were soon joined by IXL Chamber tai, an independent Mandalorian mercenary and new KAG member. He also wore the sign and assisted in the raising of funds and providing ambiance. Qapla’! We were again aided by Kate. She was the My Little Pony Rarity and brought in many donations for the cause. Qapla’!

Photo ops were plentiful by our group, and many holo-images and video were captured by Kas’Duj of the wonderful cosplayer costumes at the con. Many of these holo-images are on Facebook.

The total funds we raised that day were approximately $785. We had several potential choices for a Good Day to Dine, including with the KAG members from Asheville (Ka-Lorr, Jayr and Lukas), but opted to go with the Joker and his crowd to Golden Corral. The AER is forthcoming.

We were weary and battleworn, but duty is everything to a Klingon. Once more Kas’Duj and I threw ourselves into raising funds on the hardest day of the convention… the last.

[I had spoken with Armon at length in the days before Heroes Con; he has always considered me his Klingon mom, so I decided to adopt him at Heroes Con. At first we were going to do the Rustai, but instead we did our own adoption ceremony, since I forgot to get the transcript of the cermeony and fire was not allowed at the convention. We have since developed a backstory to go with the adoption ceremony we created. It is as follows:]

How Armon made it to our universe from the Mirror Universe is a mystery only he can reveal in his own good time. All that is known is that there has always been a connection between me and him from the first moment we met. He battled well and proved himself an honorable Warrior. He revealed that my Mirror Universe self was in fact his biological mother who had been killed in battle there. Though I never married nor had children in my universe, I was strangely not surprised. Genetic testing confirmed his words. He stated that he never knew his father, but that his mother (my Mirror self) had once told him that his father had been killed for political reasons before he was born. She never spoke of it again.

Adoption was logical. It was carried out on the 3rd day of battle. I am proud to call Armon of the Mirror Universe my adopted Son. He is not a Septaric; he intends to found his own House. Qapla’! The link to the video will be provided later.

Thanks again go out to Kate (as Donna Noble on Sunday) and Chamber for their help in raising funds. By the end of the day, we had raised $475, bringing the grand total for the Heroes Con 2014 fundraiser to $1,700. This was split 50/50 between Catawba Regional Hospice and Kwanzaa Family Inn women’s shelter. KFI received their check on 6-24-14, along with their sign, and Hospice received their check on 7-3-14, along with their banner and left over flyers.

Armon and Kas’Duj went to the aid of the 501st in tearing down their exhibit, while I packed up the KAG table. One of the 501st tried to assist me, but I told him I kind of had to do it on my own. When I got finished, I let Kas’Duj know and we exited the convention hall. He got a last minute photo op with Wonder Woman. Spiderman was outside the main door climbing on the facade in front. We loaded up the cargo vessel and warped to Gastonia where we ate at another Chinese restaurant (these types of restaurants would be welcome on Q’onoS.

It was a glorious and tiring battle at Heroes Con 2014. It is truly well named. Shelton Drum and his crew are all heroes for allowing us to come in and raise funds. All of those who donated money are heroes. And I dub all those who worked the convention as heroic as well. You have my thanks! It could not have been done without you.

One more TRIUMPHANT entry on behalf of all the KAG members who have battled to raise funds for Catawba Regional Hospice over the years (it has had several names since 2000 when we raised $24 for them): the total amount of money raised for them since that time to date is:

Thanks to Deana Tig Pollum http://facebook.com/tisingleguhnoer and Dennis Walls for the holo-images. 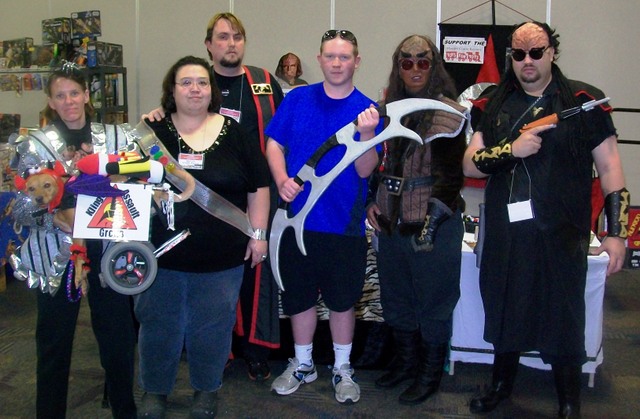 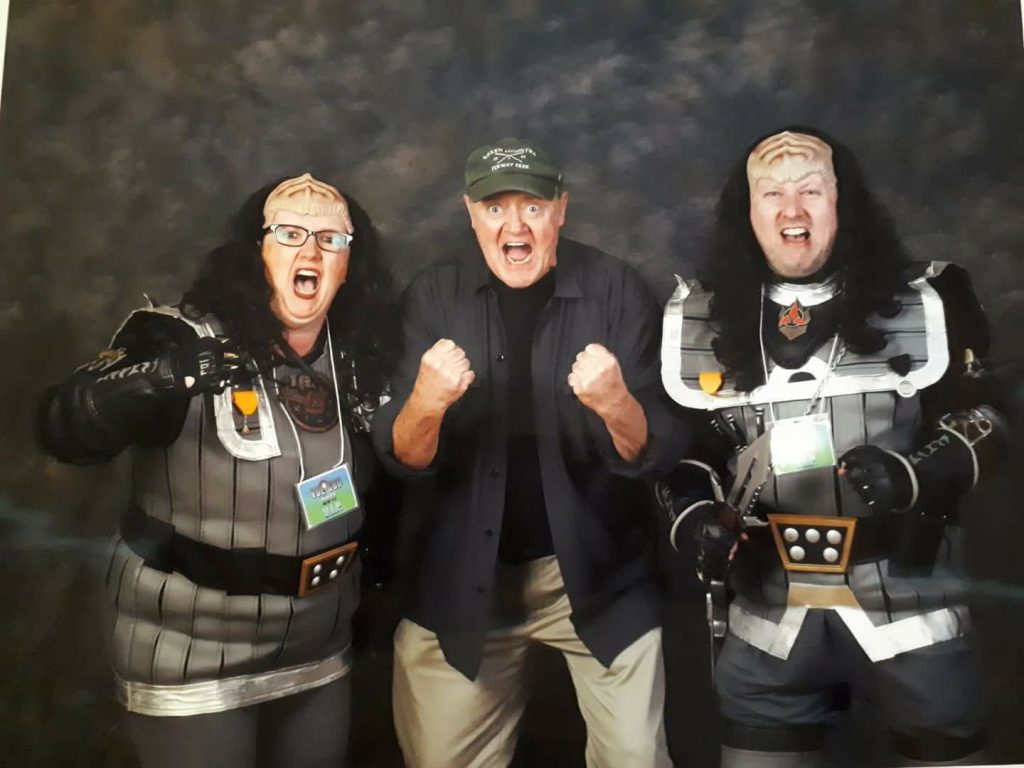