At about 0730hrs, the crew of the IKV Kabar loaded up our bird of prey with the needed supplies for the Gas City Entertainment Expo to set up a table for the purpose of recruiting and fundraising for the local APARC ( Alberta Pound and Rescue Center). A few weeks back we had contacted APARC about doing a fundraising for them and to see if they’d like to have one of their reps present for the event, they said a member of their staff would attend.

Once we had located an event coordinator, we was pretty much told we had our pick of spots to choose from and that we didn’t need any pass badges as the event staff knew who we was and what we was there for. Got to love having the head organizer of the expo on the crew. Once we picked out a place that we pretty much central to the floor lay out, we began setting up our backdrop for photo ops, flags, signage, and assorted stickers and pamphlets. Once we had everything set up, I had remembered that I hadn’t put my contact lenses in yet and was still wearing my glasses, luckily from my home to the expo was only a 5 minute drive, so I quickly went home and put my contacts in, then returned.

Once I returned I found that the crew of the IKV Raven’s Claw had arrived and was getting a feel for the layout of the venue. Short time after that the crew from the IKV Swift Hawk arrived and we set in to chatting and getting caught up from the last time we had seen each other which would have been at the Drumheller Dino Con last August. Around about 0930 the rep from APARC showed up, sporting a crate of kittens and the necessary materials to house and feed the 5 little fluff balls for the day, good thing we had 2 tables side by side for this.

V’Rell had gone and searched out Walter ( Kempel ) as he had asked her to be one of event photographers for the day to see what he needed for photos and videos. The doors opened to the public at 1000hrs, so at 0945, Vixsor and myself put on our armour and ridges as everyone else was in TOS uniforms except Teelis, the Edmonton Romulan.

Once the doors was open the crowds slowly flowed in, exploring around to see what vendors was there, where the cosplay guests were located, where the panels was being held, and check out the stage area where a couple local bands was set to play during the day. Once it was known that the Klingon/APARC tables had kittens, we was surrounded by kids, teens, and younger adults at all times. All of us at the Klingon table took turns rounding about the expo, talking to vendors, guests and expo goers about what we was doing and at times what KAG was.

A couple of times during the day, vendors would ask us to look after their tables while they ran to the washroom, or get some food from the concession stand, guest they knew who makes the best security around. One of the ladies that was manning the Vulcan Alberta table came over with a copy of their community book to show us that Vixsor, V’Rell, and myself was in one the the photos on the cover, taken at Vul-con last year, and she let us keep it.

Half way threw the day, 2Lt. Sh’ron and myself felt it was time to officially promote warrior jagiq Dath to 2Lt.as he had completed his TOS uniform. I welcomed him into the house of Ragnar by presenting him with his house badge, and putting him threw a short rite of ascension by having him repeat, “today I am a warrior” in Klingon, and having Sh’ron and Vixsor “jab” him with the prop painsticks I had with us.

Shortly after 1500hrs, our APARC rep Nolan had to pack up and get the kittens back to the APARC building before it closed at 1600hrs, but with good news, at least one of the kittens was going to be adopted once the young lady files the needed paperwork with them the next day. The local Starfleet group who was also collecting donations for APARC heard that Nolan was leaving and brought over what they had collected and added it to the jar we had on our table. They had collected $20-$25 at their table. Nolan thought it best if we keep the jar for the rest of the expo to collect more donations, and we’d bring it down to them the next morning along with the bin of toys, and food that we’d been collecting as well for them.

Also shortly after 1300hrs a KISS tribute band took the stage and proceeded to blast the venue with decibel levels well above safe limits causing some to leave the expo for fear of the damage to their hearing being done. About half way threw the bands set, Korath and Teelis left as Korath had hearing damage from a much earlier incident in his life and the music was causing him pain for which I was totally understanding and bid then farewell until we meet up again in Vulcan come the end of July.

At about 1630hrs, Vixsor, Sh’ron, and jagiq Dath left the expo as my niece had planned a BBQ birthday party for my great niece Sophie and they wanted to be there with gifts in hand. V’Rell and myself carried on. I manned the table while V’Rell was tasked with taking photos at the cosplay costume contest. Towards the end of the costume contest the crowds thinned out and some vendors started packing up, this would have been around 1730hrs, so I figured it was time to call it and proceeded to pack up the table. The two vendors across from me saw me tearing down and the one said “ well if the Klingons are packing it up, you know its time to go”.

Once everything was packed up, I moved my BOP up close to the doors, and V’Rell and I loaded it up after I removed my armour and replaced it with a T shirt that looks like armour. Once loaded up we met up with Vixsor and gang at the birthday party, with V’Rell still in her TOS uniform. After the party we all returned back to Vixsor and my place, where we watched some human non holographic viewings, and I took all the needed measurements to make a set of TNG armour for jagiq Dath. At 2200hrs we all went to bed as it had been a long day.

Both crews woke up around 0800hrs, where once we was all fairly awake Vixsor and I made breakfast for all, pancakes an bacon.

At 0945, the crews of the IKV Kabar, and the IKV Raven’s Claw made our way down to the APARC building, all dressed in hoodies printed to look like TNG armour, to hand over the cash and supplies donations we collected the day before. In total, including what Starfleet collected, we handed over $154.25 in cash donations. The staff was very happy with the funds raised and the supplies collected, and photos was taken by them to be added to their website. We can probably expect a call from APARC again for help with further fundraising campaigns. After the donations was dropped off, the crew of the IKV Raven’s Claw set course for home.

Lt. Teelis had left her lipstick at the expo, so I brought it home, Vixsor messaged her as we knew the crew from the Swift Hawk was still in town. They stopped by and picked it up, and we chatted for a bit.

All in all, I’d say it was a victory for all crews involved with this mission. Qapla’ 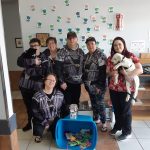