Little back story, on about Stardate 58075.6 (Jan. 28/18), I had posted on the Drumheller Dino & Comic Con Facebook page that they could expect a couple Klingons to their event this year as we had missed the previous year (their first con)due to other commitments. A short time later I was contacted by one of their organizers, guy by the name Albert, to see if we`d be interested in doing something for the con like maybe a bat`leth fighting demonstration. I conferred with my fellow Klingons about this via the Northern Storm Fleet Facebook group and had to report back to him that due to legal issues and risk of injury that this was not something that we could do.

Later that day, Albert contacted me and said it was understandable, but then asked if we`d be interested in doing photo ops for a charity as the 501st couldn`t do it the year before. I once again conferred with my fellow warriors and got back to him on Stardate 58083.7(Feb. 1, 2018) that that would be something we`d be interested in doing. I once again conferred with my fellow warriors to see which charity would be best, and we all pretty much agreed to support the Drumheller humane society. Albert and I messaged back and forth, and made a few calls to discuss details over the next few months.

Skip forward now to Stardate 58423.9 (June 7, 2018). Albert called me at home to see if maybe we`d be interested in making it a joint venture for the photo ops with Starfleet to add some variety. I posed the question to the warriors of the NSF to see how they felt about it and was told basically the more the merrier. With that I told Albert it would be ok, and that I would contact the local SFI chapter to see they would be interested, they was, in fact it was the local SFI`s communications officer that designed the banner for our table for the con.

Stardate 58612.9 (Aug. 17, 2018).
Myself, Vixsor, and V`Rell loaded up the Bird of Prey once again and made course to meet up with the local Federation shuttle Curtana at the usual place, Timmies by the small outpost called Redcliff. Once there I hailed the shuttles captain to let them know we was waiting for their arrival before setting course for Drumheller. While we waiting we indulged in some earther food and drink for the trip ahead. When the shuttle Curtana docked, its crew of its commander, chief engineer, and comms officer had some food and drink before departing. Once we left that location, the IKV Kabar took the lead position and headed to Drumheller.

With no incidents this time we arrived in Drumheller shortly after 12:30pm, and did a recon of the event location to ensure both us and the federation crew knew where it was. The federation shuttle then headed off as they had some printed materials to hand off to the event organizers, we left and met up with our new recruit that we recruited after Vul-con in Drumheller, LCpl Sh`ron, as we was bunking at her place for the weekend.

Not much happened the rest of the day other then we met up with Vixsor`s parents as they live out that way to have a birthday dinner with them as it was Vixsor’s birthday. After dinner, myself, Vixsor, V`Rell, and Sh`ron made our way over to the local shipping center to pick up a few supplies for the weekend including some gifts for Capt. K`Rau who was coming for the weekend as his birthday was a few days late. Once the shopping was done we headed back to Sh`ron`s place to rest up as we had to be up early to make our way to the event to set up as there was no setting up till the next morning.

Stardate 58615.6 (Aug. 18, 2018)
The crew of the Kabar and Sh`ron was awake at 0500 as set up time at the event center was scheduled for 0700 with doors opening at 1000hrs. On the way we stopped at the local Timmies for some breakfast, and arrived on site to set up right at 0700hrs along with the shuttle Curtana crew only to find the organizers was running late. They arrived at around 0730hrs, and pointed out where we was to set up for the next couple days. Once we was inside we found the area unsuitable to set up an 8 foot long backdrop. Some table rearranging was done, and a better spot right next to the entrance to the venue was where we set up.

The organizers was very accommodating for us in finding a better location. Shortly after a 3 man crew from the Federation ship, the USS King Edward arrived and was sent over so they could set up the table they was given for the weekend next to us as they was part of the charity photo op, which now brought the federation numbers up to 6, I was waiting on the arrival of the 5 members of the IKV Swifthawk from Edmonton to show up to add to our 4 making a KAG compliment of 10 for the weekend. I hailed K`Rau to see where they was as they found lodgings an hour away from the event, he said that he, A`kiel, K`lay, Korath, and Teelis would be there soon. They arrived between 0830 and 0900hrs, and our liaison for the humane society arrived soon after that.

At 1000hrs the doors opened and con goers came in slowly. A few pictures where taken in the morning with a combination of Klingons and federation personnel, but mainly Klingons. K`Rau did his usual thing of scouting around the event and schmoozing as he put it. Later K`Rau came back with Paul Amos, an actor and honorary KAG member from Crimson Knight Fleet to meet with us and have his picture taken with the group.

Things slowed down a bit come the afternoon, so an impromptu Klingon dance party broke out, video of which can be found floating around on Facebook. This brought a few people around including a father son dance duo, and a guy costumed from Fallout as dance participants. K`Rau was presented with his birthday card, cake and presents afterwards, with the cake being passed out to the dance participants.

When it was getting closer to closing time, the federation group suggested dinner at a local pizza place, they was paying. Now what honourable Klingon would refuse free pizza. The con closed an hour early due to lack of foot traffic, but we was told by Albert that we can expect at least 200 guests the next day as they had sold 200 tickets for Sunday. We met up with the federation at the pizza place and tales was told, food was devoured, drinks was drunk, and a good time was had by all, and Sh’ron was promoted to 2Lt. by K’Rau for completion of her uniform. It was also discussed about invading the Trekcetra museum the next day at 1000hrs as the event didn`t open till 1100hrs, we was down for that.

We all left around 2100hrs and headed back to our places of lodging for the night to rest up for the next day’s activities.

Stardate 58618.3 (Aug. 19, 2018)
The crew of the Kabar was awake by 0800hrs, and made our way into town for a quick breakfast before the planned invasion of the museum. We did the usual Timmies, in uniform, with not a single person even noticing, or at least they didn`t say anything.
We met up with the federation guys at the museum at 1000hrs exactly, while waiting for the Swifthawk as they had a bit of travel. Most of us in attendance had lifetime passes with the exception of K`Rau, A’kiel, K`lay, and Sh`ron, but the owner of the museum was nice and let them in for half price as we was all in uniform. While everyone was taking in the exhibits, I took it upon myself to acquire lifetime passes for the fellow warriors who didn`t have them, surprise guys. Some of the “normies” that was touring around the museum thought that we was costumed actors for the place, silly them, but we did get our pictures taken by a few. We left at 1045hrs and headed back to the event venue and arrived just before 1100hrs.

Once back to our booth we found it had been taken over by a certain droid being pursued by the galactic empire, you guessed it, R2D2 was making himself at home with our star/nebula backdrop. Our humane society person Nicky showed up and put one of those t-shirts on her that’s printed to look like warrior armour to make her feel at home so to say, even put one of K’Rau’s extra foreheads on her, think she liked it.

The day carried on like the day before, people would come by, give a donation, get their picture taken with some honorable warriors, or feddies, or our only Romulan Teelis. K’Rau once again did his thing, schmoozing with the earthers, but no dance party this time, for which I’m betting he was happy. At about 1300hrs the main guest showed up for her autograph session, Amber Marshall, for which her line extended quite a ways out.

We was told later that once Ambers line was done that she’d pose for a group photo with us cause we was doing something for charity, and she’d also autograph the banner we had with us at the table. The line for her autograph was upwards of 3 hours. Once our time was ready, we took down the banner and made our way to her table where we got the photo done, the banner signed, but not before Capt. K’Rau presented Amber with a KAG patch and made her an honorary member. With the banner signed, we presented it to our gracious humane society liaison for them to keep in their office.

By the time we got the photo done and banner signed, the hall pretty much emptied out so Albert said to shut it down an hour early again. We counted the money collected to a total of $260.70 and gave it to Nicky who was happy with the donation as it’s all going to a worthy cause. She said she had full all weekend with us and was thinking of joining KAG now, score a second warrior for the Drumheller area. We tore down all our displays, and packed up the backdrop and loaded it all into our ships ready for the trip home. The members of both Klingon ships said our farewells with handshakes, and hugs, then we departed back towards our home ports, the Swifthawk back to Edmonton, and the Kabar back to Medicine Hat, with the federation shuttle bringing up the rear. From the sounds of it the organizers enjoyed having us there, and I’m betting we’ll be invited back next year for the same joint operation with the Federation. 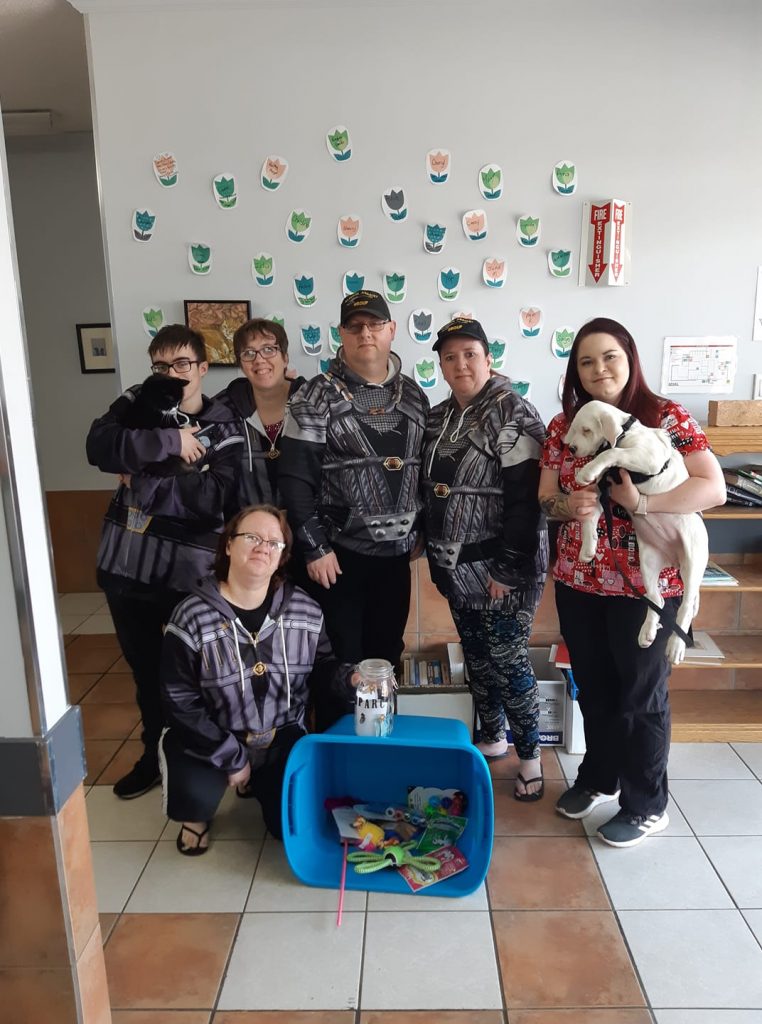